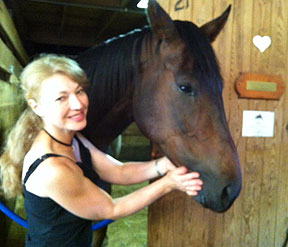 Last but certainly not least, we would like to present to you, Patti Cavaliere, our final winner in the Spring 2012 Flash Fiction Contest for her story, "Dirty Laundry." If you haven't had a chance to read Patti's award-winning story yet, you need to click here!

Years before Patti began to write short stories, an astrologer told her she could publish a book. When she had her first success with a teen story, she never imagined how long that prediction would take. After many small steps, last summer she attended Joyce Maynard’s workshop on Star Island. Joyce greatly influenced her writing style and in March 2012, "Anonymous," appeared in Writer’s Digest Magazine. In May, "The Echo and The Lake" was accepted by the Tall Grass Writer’s Guild for an anthology. By day, she works at Yale University as a research study coordinator. She has always had a deep love for animals and compassion for people, but her new passion is the young thoroughbred she inherited when her dear friend lost his battle with cancer. An essay she wrote about the three horses he left behind won first place last summer and inspired her to begin a second novel called THE YEAR OF THE HORSE. She hopes the astrologer’s prediction will come true soon.

WOW: Congratulations, Patti, on being a runner up in the spring contest. Where did you get the inspiration for "Dirty Laundry"?

Patti: Believe it or not, the inciting incident came as I was stopped at a red light before the construction of a new university. A guy in a hard hat was perched on a steel beam, and he was hanging over the side of the third floor. My mind immediately flashed back to a man I dated twenty-five years ago. He had a wild side that I’d been attracted to after my “quiet” seven-year marriage ended. The first sentence and the rest of the story evolved naturally from this one visual image.

About this same time, I wrote a longer piece called “The Last Good Bad Guy,” about the day this man stopped by to say good-bye. Twenty years had past since we lived together, and he was moving to Florida. As you can imagine, the man and the story hold a special place in my heart.

WOW: Thank you for showing us how your life is worked into your fiction! What themes did you want to explore in this flash fiction piece?


Patti: What I really wanted to say in this piece is that it is perfectly normal for a woman to remain married and still fantasize about other men. I watched an elderly couple interviewed on Jay Leno about a year ago. The wife said that the reason they stayed married for so many years is that they never fell out of love for each other at the same time! How wise and insightful. When I was young and married, I thought that once my mind drifted from believing my husband was my soul mate, my marriage was doomed. I acted on those feelings— I divorced and began years of searching for my missing piece. Although I have no regret for moving on from my marriage, I realize the missing piece is an illusion, and often, so is love.

WOW: Thus, you were able to capture what I'm sure many women (and men!) feel at sometime in their lives in such a few amount of words. Was writing this story as a flash fiction piece easy for you?

Patti: It was easy. The journey of looking for love that I mentioned above provides many experiences for me to tap into. I know if I’m truly honest, others will relate, as did a married friend who encouraged me to write the story. Often when a flash of inspiration comes to me, the emotions become so real and personal that I can complete a 1500-word story in a couple of hours. (Then I’ll spend twenty hours tweaking it for word count and clarity). I start to relive experiences, but I also make scenes up as I go—sometimes it’s almost hard for me to separate what really happened! This story was originally 1700 words. I’d submitted it to Family Circle’s annual contest. In retrospect, it probably wasn’t appropriate. I then cut it severely to submit it to another publication; but again, it wasn’t a good fit. I needed an open-minded venue such as WOW to bring this story out of the closet. Thank you so much for seeing its value.

WOW: You have hit on a great point--sometimes, you need to find the RIGHT fit--it's not always about the actual writing. We read about the astrologer's prediction in your bio. So, where are you in the process of getting a novel published?

Patti: Since my second novel is only in the beginning stages, I’m still hoping to find an agent for my first novel. I wrote it four years ago and thought it was finished. After it was rejected by two agents who requested it from a conference pitch, I began to see the light. I revised the structure completely and layered more conflict; I also changed it from third to first person. Mentors have shared their belief that your first novel is a learning experience. I am still in the process of submitting LOOKING FOR LEO to five agents who requested it as a result of pitch appointments last spring. I believe the story is unique, and I am willing to do what it takes to see it published, although I am reluctant to try the self-publishing route after talking with writers who have done this. I love to write and hate marketing. Writers whose work I admire tell me they’ve submitted to a hundred agents while I’ve only submitted to less than ten. I am past the immobilizing devastation of rejection, but since the new policy regarding submissions seems to be No Response instead of a polite rejection, I am guilty of not being more proactive in sending my work out to the next agent.

As far as the astrologer’s prediction, I believe it will happen. In some ways, it has, as I have had short stories published in at least four national publications over the past nine years. It’s been a slow process, but my writing has evolved and it’s become ingrained in my lifestyle. I am constantly looking at the world or living my life as though it could become my next story. I’d read years ago that a writer who does not give up will eventually be published.

WOW: I completely agree with you--persistence in submitting and learning the craft are what get you published! What are your novels about--similar to your winning flash fiction piece or something completely different?

Patti: All my stories are different, but I do tend to have a reoccurring theme of a single woman searching for love, peace of mind—herself. I like to take the reader on a journey of self-discovery and end up having the main character find more than she imagined. I can’t seem to write pure romance. Even when I do manage a romantic ending, it seems too neat and temporary. I do believe in giving the reader a satisfying ending; however, I prefer to set the stage and leave the rest open to interpretation for the reader to fill in as they please.

Patti: Since I work full time and I’m not a morning person, I usually write in the evening. I have only basic cable television, so distraction is minimal; and creating stories in the company of my cats is one of my most enjoyable pastimes. On weekend, if I don’t have commitments, I’ll write for twelve hours straight—I start to live scenes and can’t stop. The biggest obstacle for me is letting chores or fear (that I don’t know where my novel is headed) keep me from the computer. Best advice for someone like me who used to continually edit was to allow myself to go with the creative momentum and edit later. NaNoWriMo helped break me of that deadly habit. I actually love the editing process, and it’s so true what Stephen King recommends about putting your book in a drawer for a few weeks. Once I sit down and start, I’m committed until hunger or sleep forces me to walk away. Even on days when I just can’t find the time to write, I carry a notebook with me in my car—driving seems to free my mind to brainstorm or lyrics of a song on the radio can become a trigger.

WOW: Thanks, Patti, for giving us some insight into your writing world. Best of luck to you with your future projects!


Patti: I can’t thank the editors of WOW enough for giving struggling writers a chance to be showcased. For some of us, this may end up being our only chance to say we’ve been “published.” I remember the validation I felt the first time it happened to me and how it changed me from thinking of writing as my hobby to my passion.