Getting Down the First Line 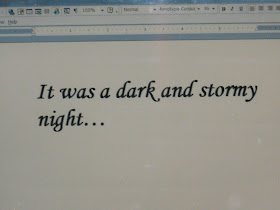 One of the toughest writing obstacles I once faced was getting down the first line.

It didn’t matter if it was a 300-word blog post or the beginning of what I hoped to be a 30,000-word novel, I struggled with the opening, with how to get the words started. And then one day, in a fit of frustration, I gave up. And in the process, beat my first line demons. And I’m going to share what I did (and continue to do), because I so often hear writers complain about staring at the blank page, not knowing how or where to begin.

Are you ready to get your mind blown? Stand back, now. Here goes: Just start writing.

I know it sounds simple, and you’re sitting there, reading that little tip and wanting to smack me. But it really is that simple. Write. Write anything you can think of related to what you want to say—and worry about the beginning when you’re done.

That’s not to say that I don’t have the occasional Eureka! moment when my brain comes up with a massively brilliant beginning. But usually, my first line is just something I throw out there, something to get the words flowing because I hate wasting time. So, I pick a starting point and go from there. When I’ve finished, I’ll go back and edit.

And here’s my first-line, mind-blowing bit, Part II. More often than not, I only have to tweak the first line or the beginning so that it bookends with my ending. Honestly. It’s rare that I dump the entire opening paragraph (although I do occasionally start a story at the wrong beginning, but that’s a post for another day).

I’m not a writing psychologist, but I have a theory. Once I’ve taken the pressure off, given myself permission to write an imperfect first line, my brain relaxes, and I end up writing a pretty decent beginning sentence.

It works for me. It can work for you. So no more excuses. If you’ve got a wonderful idea for a novel, a short story, an article, a blog post, even a picture book, just start writing. A terrific first line will come—sooner or later.