Like all writers, the mantra Show, don't tell has been drilled into my head for decades. It's also what I try to instill in my middle-schoolers. Don't tell the reader your character is angry. Show the reader. What's going on with the character's breathing? Is their face getting red? Are they clenching their fists? Are they pacing?

I also depend on internal dialogue to flesh out a story. The thoughts that are swirling around in a character's head add so much to a piece. Every instant, we're having a conversation with our self--in our head. Letting the reader in on a character's internal workings enriches a book. 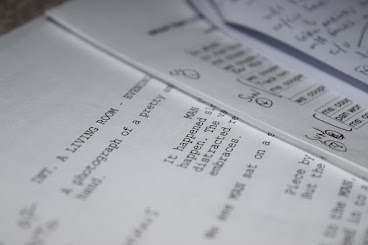 When writing a screenplay, the writer has to tell what the viewer will see--in a straightforward way. Usually, I try to paint pictures with words. Flowery phrases. Similes. Metaphors. Alliteration.

If you're curious how writing a novel is different from writing a screenplay, you can read this article.

I'm halfway through a first draft of a script. I'm transforming my novel, Greenwood Gone: Henry's Story, into a screenplay. While at a writing retreat, a writer friend asked me if there were directors interested in it. Of course. Have you heard of Martin Scorsese? Denzel Washington? Steven Spielberg? The three of them are in a bidding war.

Just kidding. But I can fantasize, can't I?

The good news: there are screenwriting programs that help you with the formatting. I'm using StudioBinder. After getting accustomed to what I initially thought of as wonkiness, I've found it's almost intuitive. After typing up a bit of action, the program automatically switches to a character and dialogue. Or does it? Is it simply me that has gotten into the scriptwriting groove?

I started this as my NaNoWriMo project. A finished screenplay is going to be much tighter and way less textier, so even if I had finished it by November 30, it still would not have been 50,000 words long. I told myself that if I got to the end of the book by the end of November, I'd consider NaNoWriMo a success.

However, the way I look at it is this: I have half of a rough screenplay done, and that is a half of a screenplay more than I would have had if I had not done NaNoWriMo.

It's good to be a cup half-full person...

Writing friends--I see some of your pieces as future movies. Seriously. Pat Wahler: Your book I am Mrs. Jesse James would make a superb movie. Linda O'Connell: The memoir I keep bugging you to write? It would make an incredible movie. Renee Roberson: You have dozens of real-life stories about missing people. Your lovely voice narrating the haunting episodes? It would be a definite winner. Angela Mackintosh: The memoir/novel you're still writing (and I haven't even read, but I know it will be mind-blowingly brilliant when it's finished) would be perfect for the screen.

Sioux Roslawski is a freelance writer, the proud author of Greenwood Gone: Henry's Story, a rescuer of dogs and a middle-school teacher. You can check out more of her writing on her blog.