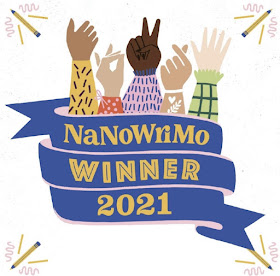 In my last blog post I wrote about how this year’s NaNoWriMo project was going. In mid-November, I was on track to complete my goal of 60,000 words. The novel is a suspense thriller set in a fictional town in North Carolina. It features a young woman who hosts and produces a podcast about people with survival stories, from kidnappings to domestic violence and everything in between. She is also investigating the disappearance of her older sister, who went missing from the summer camp she worked at when the podcaster was still in high school. I don’t have an official logline or elevator pitch for the book yet, and only a placeholder title. I had the fifteen story beats outlined when I began, but many elements of the story changed almost immediately.

The process of writing the story flowed easily in the beginning. I think that was because I knew I wanted to include transcripts of some of the survival podcast episodes, because the podcaster learns things from these stories that she uses later in her own survival. There is also a “B” story about a church that acts as a cult and the podcaster names them in a series of episodes she later wins an award for. You don’t know if people following her and sending her threatening messages are connected to the church or are simply pretending to be, and there’s another twist about the cult survivor story that factors into the plot. These “transcripts” flowed easily and helped make up the bulk of the first part of the book. Where I struggled was the second part of the month. I began to get anxious about being able to wrap up the story by Nov. 30. This is not a requirement for NaNoWriMo, but I personally wanted to do it so the editing process would be easier. I also just got tired, and I had a big work deadline in the middle of writing, which forced me to work on the book later at night, and my mind is not as sharp that time of day. The post-it note method worked well for me, but I will admit I got sidetracked the last fourth of the novel and never updated the notes on my wall. You know what they say about the best laid plans . . .
I finished the project early in the day on Nov. 30 with 60, 378 and the draft has a beginning, middle, and end. This was my third completed NaNoWriMo project, so it’s obvious I’m one of those writers who thrives on deadlines. I also have a weird obsession with summer camps, although I never went to one in my childhood (I have a middle-grade novel that also takes place at a camp in Texas). Once I tell people I have a goal, I don’t want to admit I didn’t meet it, either. I’m already thinking about revisions, although I haven’t opened the document back up since I finished it. The protagonist needs a sidekick/friend. Or her virtual assistant needs to be fleshed out more and made into a friend. The story is told by different POVs, and those voices need to be tweaked. A few loose ends need to be clarified better at the end of the book. My podcast had to take a backburner during this time, although I did somehow produce two episodes during November. December may be a wash.
That’s my wrap-up on this year’s project. It was my first shot at writing a mystery/thriller, so we’ll see if beta readers think I covered all the important elements once I get to that point. But first, revision!
I'd love to hear your own past and present NaNoWriMo stories!
Renee Roberson is an award-winning writer who also hosts the true crime podcast, Missing in the Carolinas. This is her third completed project for National Novel Writing Month. Learn more at FinishedPages.com.
Renee Roberson at 12:00 AM
Share