I will begin by apologizing. I’m sorry. It’s not the first apology--when it comes to my soon-to-be book--and I know it won’t be my last.
I apologize for being white and female and old, and for telling a story from a Black and male and youthful perspective. I’m sorry I am the one telling Henry’s story… or rather, I’m sorry I’m telling Henry’s story and not a male POC author. I wish someone else had told it.
But Henry chose me, not somebody else.
When talking about this about-to-be-born book, I usually add: I didn’t write Henry Simmons’ story. He came alive when I had over 25,000 words and then scrapped them all and started from scratch. Things happened to Henry and he saw things and he realized things… and I was merely the conduit. I know that sounds like an excuse for this not being an #OwnVoices story. I also know that the above is full of a great deal of “I this” and “I that,” and I don’t mean it to be.
I mean to be telling the horror and loss and injustice and the loss and the loss and the loss of the Tulsa Race Massacre.
A little background information: I wrote a manuscript about the Tulsa Race Massacre (sometimes mistakenly called Tulsa Race Riot, but there was no riot). After sending it out to over 120 agents and publishers, I finally got a yes. The manuscript is going to become a book. The 100-year anniversary of the massacre is coming up in May. I plan on being in Tulsa with my book. 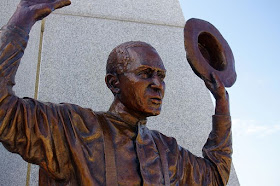 image by Pixabay
This is a sculpture in Tulsa. During the massacre, Black people
were often shot and killed despite having surrendered. A.C. Jackson
a local surgeon who was recognized nationally as a gifted surgeon,
was shot in his front yard even though he said to the small mob, "Here
I am, I want to go with you." Jackson was only forty years old when he was murdered.
But do I have the right? Do I have the right to even tell the story?
I recently contacted a nationally-known and well-respected expert on the Tulsa Race Massacre. She and I are both educators; I’ve met her at national conferences. Would she be willing to read my manuscript and possibly give me a blurb for the book cover? She said she’d love to… and then she asked the million dollar question. Who was telling the story? When I told her it was told from the perspective of a young African American male, there was a reflective gap in time. And then she respectfully said no… and she gave me some suggestions.
She also said some Black Tulsans feel saddened when people are making money off of their pain and suffering. That made me stop--as a writer and a human being.
I’ve made some decisions. I’m going to continue with this on my next post (or two) because it’s too huge to cover in just 500 words. But I’m interested in what you think. Is this a story I can tell?
And please be honest. Please.
Sioux Roslawski's writing has been published in 15 Chicken Soup for the Soul anthologies. She's more than halfway through November (and NaNoWriMo) yet hasn't made as much progress as she'd like, since she's writing surrounded by her middle-school students. If you'd like to read more of Sioux's writing, check out her blog.
Sioux Roslawski at 12:30 AM
Share