I hate sports. I despise ‘em. I have no interest in car races. They bore me to tears. However, I love Hoosiers. I love Million Dollar Baby. I love Seabiscuit. I love Heart Like a Wheel (that is an oldie but a goodie). I love Ford v Ferrari (which I just saw a couple of weeks ago).

The common denominator in all those movies? The underdog. A broken-down coach/girl/horse. A female driver in an all-male arena. A couple of rough-edged racers up against a sleek Italian car company.

And man, do I love the underdog.

In my will-it-be-forever-a-WIP-and-never-a-book-? manuscript, the centerpiece is an underdog. A 12-year-old young man who’s fighting for his life.

Here’s where the left turn comes up.

In writing this post, I read some articles and posts on underdogs, and I thought about some of the iconic (in my eyes) underdogs. Jim Braddock. The 1980 U.S. Olympic hockey team. Gandhi. Rocky Balboa. (Okay, I realize that Rocky is a fictional character, but did you know that Sylvester Stallone wrote the script for the original Rocky movie himself--in three and a half days? You may not consider him a stellar thespian--maybe you do--but do you think of Stallone as a writer? A writer who could churn out a movie script in under a week? The movie was the highest-grossing movie of the year, was nominated for 10 Oscars--one of them for writing--and won 3. That is its own little underdog story.)

Then the question came up: Do underdogs always have to win in order for the reader/viewer to be satisfied?

Put your left-turn blinker on again. We're two-thirds through a u-turn.

I watched a short mostly-animated movie on a real-life Japanese race horse (Haru Urara). Certain I would ditch it even before the 18 minutes elapsed, I was surprised. I was riveted until the very end… and it got me thinking.

Writers who do their best, writers who keep writing and submitting--even if they never get a book published… are they still considered winners?

Put your left turn blinker on for the last time. We’re finishing up our u-turn, but we're ending up in a different spot than where we began.

Curious about Haru Urara, I read an article that touched on the Japanese spirit. In Japan, the form/effort/simple beauty of something is more valued than the outcome/cost. A tied game, where each team does their best, is the most perfect conclusion. Neither team is embarrassed or ashamed. Each team is a winner. The author of the article, Richard R. Gross, wrote “At gift-giving time twice a year in Japan, the perfection of the lace pattern on a melon is more prized than even the fruit itself.”

So, this might be a bit early to call it, and it might seem like a version of the sour grapes story… You know, this will never happen (getting my manuscript published), but that’s okay, I feel good because I put up a valiant effort for a long time, but I do wonder.

Maybe it’s okay to ultimately not win the golden prize (a published novel). Maybe I can think of myself as a winner despite the fact that my manuscript might collect dust forever.

How about you? What makes you feel like a winner? For you, is it reaching the destination… or the journey itself? 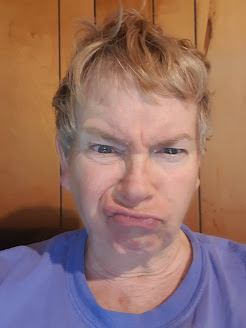 Sioux Roslawski is a middle-school ELA teacher who is going to simultaneously teach in-person and remotely. (Her lessons will be streamed to those students who are learning from home.) Since she will have both a mask and a face shield on, much of her facial "communication" will be obscured. The photo to the right is getting enlarged, and will be glued to a paint stick, so when a student begins to share a writing piece with the words, "I don't think this is any good..." or they insist, "I can't write poetry," I will show what my face is doing under the mask. There is another one--which will be the other side of the sign--with my mouth gaping, so when there is an OMG moment--when a student has written something that is amazing, I'll hold that one up. (And no, probably much to your surprise, my hair does not usually look like this... I thought it would a funnier sign if I took the photo as I flaunted my bed-head hair.)