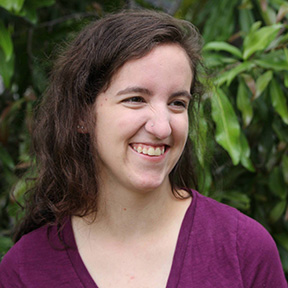 Connor Sassmannshausen is an Australian based American author and filmmaker. Her works can be found in Daily Science Fiction, Enchanted Conversation, Fantasia Divinity, and Mad Science. When not writing she enjoys watching movies, traveling and cross-stitching. She enjoys writing fantasy and science fiction in this universe or someplace new.

WOW: First of all, congratulations on winning runner up in the flash fiction contest! I loved your story War-Beast. What was the inspiration behind this story?

Connor: This story started with a picture prompt. I had no idea what to write for a few days, and then it just hit me. I was given the option of having my story uploaded with the picture on the website, but I liked the story so much, I wanted to find the right place for it.

WOW: I'm so glad you did! So, is it ever hard to keep your fantasy and science fiction stories short? What is your method?

Connor: Keeping stories short is hard. My first attempt at a story under 1000 words was going great until I looked at the word count and I was at 1500 and I had barely introduced the characters. I find that the best way to keep sci-fi and fantasy stories short it to find the element to focus on and get to it as quickly as possible. I've been writing a fair amount of 100, 200, and 300 word stories recently. I find my element that makes the story the genre I want to write and I try to jump into the action as quickly as I can. Then end it as soon after everything concludes as I can. You don't have to answer all the questions.

WOW: I love how you said that you don't have to answer all the questions. That's excellent advice. Do you ever reuse worlds that you've utilized in other stories?

Connor: So far, it's not very often I revisit my various worlds again, other than planned sequels (which isn't going as smoothly as I would like). I wrote one short story with characters I loved so much I decided to write a novel. My parents read all my short stories, and their first response is "Where's the rest of it?" I have some ideas for turning some of my short stories into novels or incorporating them into new stories.

WOW: That sounds like an amazing idea! What are you currently working on? What can we expect next from you?

Connor: That novel I said I decided to write, I'm working on the for NaNoWriMo this year. It's been interesting. I had a basic timeline for my characters to follow. So far, they haven't listened, but that's okay. The story is still headed in the right direction. In the next few months, I have quite a few stories in some anthologies.

WOW: Ha, characters don't always listen well! You have such an impressive number of publication credits. Do you have any advice for writers who are trying to get their stories published?

Connor: Publication is the hardest part of writing. You're going to get a lot more 'no's than 'yes's. The important this is not to get discouraged. A denial doesn't mean you're a bad writer, no matter how the rejection letter sounds. Your story just isn't right for them, and that's okay. You'll find the right place for your story. One of my early stories still hasn't found the right place. I find it helped me to set a goal for denials. That way every no I get is one closer to my goal, while a yes mean publication. I've hit 100 denials with 10 publishes. It can be a little discouraging at times, but it's important to keep writing.

WOW: You are so right - keep writing! Thank you so much for talking with us today and best of luck with your next stories!
Nicole Pyles at 1:30 AM
Share