The Key to Success Is Driven Home 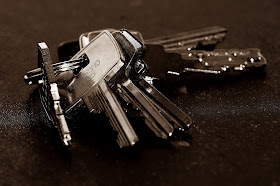 So Oldest Junior Hall left his (very) old car in my garage, hoping one of the workmen doing repairs on my house might want to buy it. But in the meantime, I had to take the (very old) car to the bank because my car was blocked by trucks.

Three days passed with me going out to the car two or three times a day, trying to get the key out of the ignition. And then Youngest Junior Hall stopped by the house. I pointed to my nemesis. “See if you can get this (use-your-imagination-here) key out of this car.”

Click went the key. “Presto,” said my son, putting the key in my hand.

ARE YOU KIDDING ME?

So here is the point where I make my writing point. Because honestly, before I even called Oldest Junior Hall to let him know the key was free, I thought about writing. Specifically, I thought about critique.

How many times, I wondered, have I spent hours—days, even—on a manuscript, trying to make something work and I just couldn’t figure out what was wrong? And then moments after sitting down to critique, one of my writing partners points to a troublesome spot and with a suggestion or two, more or less says, “Presto!”

How many times have I thought a manuscript was super submission-ready, only to sit down with an agent or editor who found the spots where the story just wasn’t clicking?

I know it’s not always easy to find the right critique group, or to shell out the money for a professional critique, but it’s vital to have another set of eyes checking your work. Because just like with the key in the car—where I was obviously doing something wrong, and I was doing the wrong thing over and over and over again—we can get stuck.

We can completely miss the gaping plot hole because we know the story and our brain fills in that hole. Or we can miss the character whose name changes midway through because we simply keep reading it as the same name. We can overlook a hundred errors, big and small, because we’ve worked so hard and so long on a manuscript that what’s wrong with it no longer catches our eye.

So the next time you think you don’t really need critique, remember that finding an answer to an annoying problem might just be one set of eyes away. And presto! The key to success (and maybe even to a very old car) could be right there in the palm of your hand.