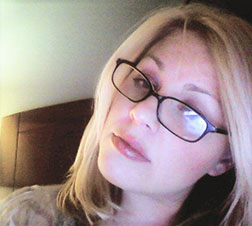 Tracy loves all things short-form—especially her children. Her poetry, prose and screenplay work has been published and prized in anthology and competition. You’ve also probably seen, heard or even held Tracy’s words; as a Los Angeles advertising creative charged with storytelling for some of the world’s largest brands, she’s produced award-winning print, web and broadcast copy for a thousand years (a spoonful of hyperbole). As one of few native Angelenos who hates the sun, she recently moved up to rainy Seattle. Adding water really made things bloom, and she is now hard at work on Cracks, her novel about an abused girl saved by universe-hopping, and a serialized flash mashup celebrating song lyrics.

If you haven’t read it already, take the time to read Tracy’s story, “Fear of the Sentry,” and then come back here to read her interview.

WOW: What was your inspiration for “Fear of the Sentry”?

Tracy: My husband was in the military, and we've talked about the similarities between young soldiers at war and our most vulnerable population–like the main character–who get caught in volatile situations. There are many kinds of soldiers and just as many war zones. Often, the ones who most need protection take shrapnel to the heart without care or notice of those in charge. There are two groups of people with high rates of PTSD - soldiers and survivors of abuse and domestic violence. Here they are tragically complementary puzzle pieces for telling a young survivor's tale.

WOW: You’ve packed so much information into this short form, but still leave some things out. We don’t know the narrator’s name, gender or age, things the author generally includes. Why did you decide to eliminate this information?

Tracy: To tell this story the way I wanted I couldn’t write it straight. The device was obviously a factor; there’s a certain blindness that I wanted readers to feel along with the narrator. I also felt the story would have greater impact if the image of the narrator was entirely formed by the reader upon the reveal; I wanted the strongest truth to come from that immediate reader reaction. Lately I've been experimenting with leaving some key character elements unaddressed. Beta feedback has been quite fun. I love all of the different interpretations.

WOW: How did your story change from initial draft to finished form?

Tracy: This was a slightly longer story that I cut down, and I’m happy I did because it better served the piece. I feel the economy of language affords a sort of staccato rhythm as the action builds toward the overarching conflict. Other than cutting and tightening, the content remains very true to my first draft. The story has always lived as I imagined and told it.

WOW: How has your work in writing ad copy impacted your ability to write flash fiction? What skills transfer from one form to the other?

Tracy: I come from an advertising background. I am often tasked with telling the entire story of a major brand or company in a tagline of seven to ten words. Or in a single name. That’s some short form! I’ve written commercials and infomercials, and other traditionally editorial pieces with more meat, but most of my work to this point is very compact and requires an instant connection based on authenticity and hook - much like flash has to grab you right away to be successful.

I think the ad world is the perfect training ground for short fiction, especially flash. It’s funny, 750 words feels roomy to me!

WOW: What advice do you have for writers who are new to flash fiction?

Tracy: Finesse isn’t as important as finished. Just write, then go back to massage and tinker. When truly stuck, stop and do something else. Just like insomniacs shouldn’t be in bed when they can’t sleep, I firmly believe there is no use in staring at a blank screen as your blood pressure rises.

Another tip I find useful in writing flash (and most everything) is composing work inside an email draft; it’s a very low-pressure box into which you can pour your thoughts. I don’t do Word until I have to.

WOW: That’s something I’m going to have to try when I tackle NaNoWriMo. A novel isn’t a short form but I always freeze up under the pressure. You just gave me the tool I need to move forward.

To sign up for updates about Tracy’s writing, visit her web site.