A is for Accountability

I don’t know about you, but I have to be held accountable by someone or something (an editor, peers, conference deadlines and workshops) in order to stay productive. While I wish I could say I’m one of those writers who rises before dawn each day to work on my craft, I’m not. I think part of it stems from problems with focusing, but mostly I’d say it’s just good old-fashioned laziness and the distractions I face daily working from home. I’m the writer who turns in clean and consistent copy, but it’s usually turned in on deadline day and not a day earlier. For the magazine I edit, I only have to answer to myself (and our printer deadline) so guess whose articles get turned into the design team last? Mine, of course.

I think because of my personality, writing marathons such as NaNoWriMo appeal to me. I wrote the initial draft of a novel several years ago after winning Book in a Month by Victoria Lynn Schmidt as a prize in a writing competition. I decided to apply the principles I learned in that book and completed 60,000 words in March 2009. As so many eager writers do, I immediately rushed through revisions and started sending out queries to agents, even though I wasn’t even sure what genre the book fell in. After three or four rejections, I shelved the manuscript but went back and dabbled with it from time to time. In 2012 I participated in a modified NaNoWriMo and completed 20,000 words of a middle-grade novel that I’m still working on.

Last year, after re-writing several chapters of my first book in a children’s writing class, I decided to write a new draft during NaNoWriMo and completed 50,000 words (I had to scrap most of the original version, but those are the breaks). A few months ago I took the first ten pages of that YA novel to an SCBWI conference and got some very positive feedback from both an agent and a young adult novelist.

Even though I'm in the middle of a busy season with regular clients, when NaNoWriMo rolled around this year I signed up, all while telling myself I was crazy to attempt it again. But I’ve had an idea for a YA novel in my head for about a year and I figured now would be as good a time as any to try to get some of it down. I told myself that even if I only got 50 pages written, it would be a great start. I’ve gotten behind the past two days, but I plan on making up for lost time on Nov. 24 when one of the big deadlines I’m working on will officially be off my plate. Can I tell you I have had a blast with this new book? Every time I sit down at the computer to work on it the words flow. I’ve had not one inkling of writer’s block. I feel more comfortable writing dialogue than I ever have and even caught myself “info dumping” in places and immediately fixing it.

I give credit to all the writing marathons I’ve participated in before for helping me get to this point. When I complete this NaNoWriMo novel (and I will!) I will have three children’s books under my belt. I will finally have the confidence to start submitting to agents and publishers, and I will know that I have the stamina to churn out words in a steady fashion when I need to. I’m also posting my progress on social media so my friends and family can hold me accountable for completing this latest book.

How do you hold yourself accountable for completing writing projects? Do you rely on writing marathons, retreats, editors, etc.? 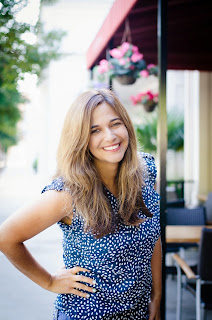 Renee Roberson is an award-winning writer and editor who also works as a blog tour manager for WOW! Women on Writing. Her son's unexpected bout with guttate psoriasis this past spring inspired the idea behind her latest NaNoWriMo novel, a contemporary YA.
Renee Roberson at 4:30 AM
Share