Are you ready for the end of the world? 2012: The Rising by Joanne Hirase

If you have cable TV then you’ve probably heard that the end of the world is less than a week away. National Geographic and the History Channel are chock-full of shows preparing us for the impending apocalypse on December 21, 2012. While most of us busy ourselves with holiday shopping and getting ready for the New Year, isn’t there something in the back of your mind that makes you wonder if it’s all going to go down?

WOW team member Joanne Hirase explores these theories in her debut novel 2012: The Rising, and we’re celebrating its release! You may not immediately recognize Joanne because she does a lot of work behind the scenes, but she’s been an integral part of WOW since 2007! Besides her work with WOW, Joanne is corporate in-house counsel for Hoku Corporation and adjunct professor at Idaho State University. She lives in southeastern Idaho with her husband Bill and their rescue dogs. Find out more about Joanne by visiting www.JoanneHirase.com.

So pull up a chair, grab your favorite beverage, and join us for an intimate conversation as we find out more about Joanne’s debut novel! 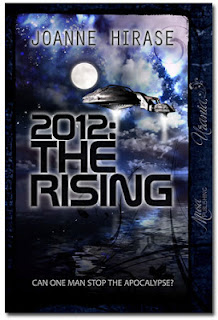 Several ancient civilizations have predicted the end of the world on December 21, 2012, but Mac Carter doesn’t believe it will happen. He believes he’ll wake up on December 22 and the world will be the same. When he meets the mysterious Vareeda Shintuk, his beliefs are questioned. He struggles to resist her message about the great threat to humanity and his power to alter the fate of the universe, but her words are powerful and mesmerizing. As he puts together the horrifying truth, he discovers he is the key to a future for mankind.

Mac finds himself tangled in a chaotic double life of lies, deceit, and evil. He struggles to do the right thing, but will he succeed?

2012: The Rising is available as an e-book through Musa Publishing, Barnes & Noble, and Amazon.com.

WOW: Joanne, welcome to The Muffin. Ever since I’ve known you, I always thought you’d write a women’s fiction, mystery, or maybe even a children’s or YA novel . . . but science fiction? I never would’ve guessed it! What inspired you to write in this genre?

Joanne: My husband got hooked on Ancient Aliens and Histories Mysteries. He started telling me all about the 2012 theories, and concocted a book plot in detail. I took notes, and asked a lot of questions. He DVR’d all of the shows, told me which ones were relevant, sat me down in front of the television, and I caught the fever too!

WOW: Oh, that’s great. I love Ancient Aliens—especially the guy with the big hair! And I love that those shows are on the History Channel. So did you collaborate with your husband beyond that initial brainstorming session? Any tips for successful collaboration with a spouse?

Joanne: If I had questions or got stuck, my husband helped talk it out. We argued about a few things, and unfortunately he’s almost always right. (But don’t tell him I said that!) I had to walk away, think it through, and then have a rational conversation about the issue. We’re both strong personalities, so to successfully collaborate, we had to approach this the way we approach all decisions we make—with a lot of back and forth and give and take. The great thing about fiction is we can create the scene the way it makes us happy.

WOW: I remember my first serious boyfriend introduced me to the Mayan prophecies and how their calendar is set to end on December 21, 2012. I’ve been fascinated by the theories for years, and I can’t believe the date is almost here! Your book, 2012: The Rising, incorporates some of these theories. What is the most surprising thing you’ve learned about through your research?

Joanne: The most surprising thing I learned is that there are so many theories about December 21, 2012. I honestly didn’t know about anything other than the Mayan calendar, so when I started digging around, I couldn’t believe what I found! Now when I hear about a natural disaster or an asteroid passing close to Earth, it makes me think about the end of the world.

WOW: 2012: The Rising has a riveting plot, but at its core it’s a character-driven novel. The book contains several triangles—Mac, the protagonist, and his girlfriend Emma, and Mac’s best friend Rusty. Then there’s the beautiful and mysterious Vareeda . . . there’s a lot of tension and conflict! How did you go about forming the main characters in your book?

Joanne: I had an idea of what Mac would be like, and formed the other characters around him. I love the book First Draft in 30 Days, and used some of the worksheets to help me think the setting and characters through. Creating characters is one of my favorite parts of the writing process. I try living their life with all the hopes, fears, and doubts they experience, and it’s amazing how well I get to know them all.

WOW: Writers will be happy to know that your book started as a NaNoWriMo project. For those that are sitting on their rough drafts right now, what advice do you have for them when they pick up the red pen in January? (If we survive the apocalypse, of course! ;)

Joanne: Love what you wrote, but love your audience more! It’s painful to edit, but to keep your readers going, sometimes you have to delete those wonderful words. I redline using Track Changes and save my drafts just in case I want to bring something back. However, after I’ve cut scenes out, I’ve never put one back!

WOW: That’s great to know and makes me feel better about cutting. Okay, so I have to mention this marketing challenge you’re facing at the moment. Your book just came out last Friday, December 14, and your book is about the end of the world on December 21, 2012. That’s exactly one week to market it and make sales. Sure, you can sell books after the date, but the topic will be less timely. What are you doing to get the word out, and how can your fellow writers help?

Joanne: Besides the huge WOW! community that reads The Muffin, I’m blessed to have Dianna Graveman of 2 Rivers Communications & Design on my side. She is an amazing marketer, and is helping me create buzz. I’m getting a lot of compliments on my website that she built, and on my book trailer that Kim McDougal of Blazing Trailers made. Without Dianna and Kim, I’d be in a panic! Social media seems to be the best marketing tool, and fellow writers can help by retweeting, liking, and sharing!

WOW: I love your website and trailer! They did a great job. Have you seen National Geographic’s Doomsday Preppers show? I find it enthralling. Have you considered marketing to survivalists?

Joanne: I have seen Doomsday Preppers, and have actually been accused of being a prepper! I live on a mountain pass, and it would be hard for me to get to the store if something were to happen, so I have a fairly abundant food storage (for the dogs too!) We are reaching out to everyone that we think will be interested, because you just never know . . .

WOW: Thank you, Joanne, for taking the time to chat with us today! Please tell us what’s next for you.

Joanne: I have three sci-fi manuscripts in the works—one needs editing, and two need to be finished. I also have a mystery that I’ll start marketing again, plus three other manuscripts that need to be pulled out and reworked. Clearly, I’ve been writing for years, and to finally get published gives me that extra incentive to want to publish more!

WOW: Congratulations on your success! You’ve hooked me already. I can’t wait to read more from you.

If you have a question for Joanne or want to talk about your end of the world theories, please leave a comment! :)