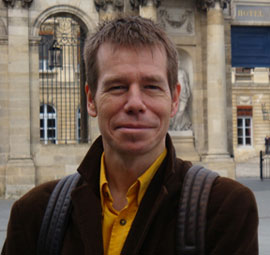 Born in Scotland, Philip has spent most of his adult life in France. That doesn't mean he's forgotten his Scottish roots. He still likes stormy weather, dankness and spooky stories.

For the past several years, Philip has been attending a creative writing workshop in Shakespeare & Co, which has led him to an interesting discovery: writing humorous horror stories.

If you haven't had the opportunity to read Philip's story, take a few moments to read this gem and then come back in join in our discussion for lots of great writing tips.

WOW: Philip, welcome to The Muffin. Congratulations on earning runner-up honors in the Spring contest. What an interesting story you've written, my dear. (grinning) Why did you select Sigmund Freud to question Mrs. Piroska?

Philip: Piroska, incidentally, is the Hungarian name for Little Red Riding Hood. I've always loved fairy tales. They serve some of the same purposes for children as horror stories do for adults. Except that fairy tales manage to find a happy ending while the best horror stories never do. Both deal with disturbing taboo subjects in an accessible way - which is what I was aiming for. I'm not sure where the idea came from originally. I was probably influenced by writers like Angela Carter and Roald Dahl. I read and really enjoyed Bruno Bettelheim's Psychoanalysis of Fairy Tales some years ago, so the idea of Freud must have come from there.

WOW: I never thought about a correlation between fairy tales and horror stories. Fascinating! I'd like to take time to talk about the importance of character. How difficult is it to create an original character in a thriller?

WOW: I once had a college literature professor who taught that all stories use the type of conflict, but the resolution of the conflict is what either makes or breaks a story, so it's interesting that your characterization theory follows a similar path. In your bio, you mention humorous horror stories. Now that's something I would like to read! How do you market this genre? Is it geared toward comedy lovers or horror aficionados?

Philip: Marketing is more the problem of whoever is kind enough to publish what I write! The stories I tend to write - and "Little Red Riding Hood Complex" is not a good example - are black comedies. I would hope that they are geared towards everybody. The best books are never just one genre. If you say "horror writer" you immediately think of Stephen King. Even in his earliest work though, King tended to write tragedies - with a sprinkling of the supernatural. The real horror in Salem's Lot is the victimizing of children rather than the cartoony vampire. But the tragedy of a tragedy is that it always has a burlesque side. Ultimately, it depends upon your point of view.

WOW: Philip, let's chat about the writing process for a bit. A group of writer friends and I have been discussing research and its use in fiction. How much research do you conduct before writing a story?

Philip: It's better, I think, to write the first draft of a story first and do any research afterwards. The story is always more important. I think facts should always be subordinated to the plot. Research, I feel, should be kept to a minimum. Walter Scott, in his historical fiction, was good at evoking bygone times and this was, paradoxically, because he never let accuracy get in the way of the story.

WOW: I'm with you. Sometimes, if you have too much collected data, it clouds your intent. I'm curious. What stage of the creative process do you find most exciting? Most terrifying?

Philip: I love the time when I have an idea for a story. I like taking walks and working it all out in my head. I hate writing the first draft - it is always so far away from what I imagined the story to be. After that I enjoy revising, revising, revising trying to bring it closer and closer to my original idea.

WOW: It's difficult, sometimes, to get that first draft on paper. Maybe we're both perfectionists! When and why did you start writing?

Philip: Quite young I think. Six or seven? My first character was a kind of Hercule Poirot imitation. When I was younger I preferred reading to writing. As I get older, it has somehow become more and more necessary for me to write. Nowadays, I don't feel well if I can't write a little everyday. It's a drug.

WOW: In that case, I'm addicted to writing, too. It's been a natural part of my routine for such a long time. I can't imagine not writing. So, Philip, what's next in your writing career?

Philip: I really enjoy WOW's Flash Fiction competitions. They're a good discipline and help you brush up your writing. In the future. I'd like to find a way to publish some of my longer stories.

WOW: We're happy you enjoy our contests and hope you continue to participate! Congratulations once again, Philip.