Loopy with Literary Devices: When your dictions & onomatopoeias are just so much buzz 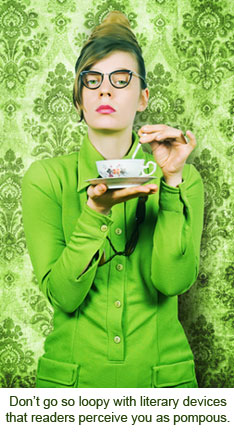 "I want to make a paradigm shift in time for that offline chat," says Ilene.

“Sizzle! Think: accountability targeting, transparency concerns, high impact." Savana puts a finger to her temple and then aims it at Ilene. “Pow! We’re fatal to the competition.”

Writers need to be weary of overusing diction (paradigm shift, offline) and onomatopoeia (sizzle, pow)—or any other literary device. Diction, in the sense of word choice, is an excellent literary technique to master because few stories have no dialogue at all, which means just about every writer must consider word choice for her characters.

What’s wrong with the above example? The writer is trying to write a modern story, so she’s using modern diction presumably to reinforce time, location and character development. But she’s gone too far. We are lost and probably feeling as though we are reading an advertisement. There’s a good chance the reader is not going to read on.

What is the solution to this problem? Recognize that overdoing modern diction and onomatopoeia means your writing is buzzing with buzz words—a big no-no. A good rule of thumb is no more than three buzz words per line and, even in that case, the dialogue must really suite your character.

Why is this such a sin? Because buzz words often make readers feel as though you are trying to impress them with just how current your writing is and once the reader is aware of the writer you are in danger of losing her, not to mention most readers don’t enjoy pompous writers. For this reason literary devices, such as diction and onomatopoeia in particular, can quickly turn into buzz words. (Buzz words should also not be confused with jargon or insider talk, but that’s another article.)

Mastering literary devices aside, some writers simply don’t notice buzz words. Certain buzz words become everyday words and, in turn, part of our everyday writing. The primary purpose of employing literary devices as a group—not individually—is to reinforce your theme and, thereby, deepen your writing. Overusing those same devices often has the opposite effect: shallow, superfluous and ineffective writing.

So by all means, explore literary devices and go way beyond the two I have used as examples here, but don’t go so far that your writing buzzes into oblivion. Talking down to your readers, inadvertently or not, is a surefire way to lose them.

Don’t go so loopy with literary devices that readers perceive you as pompous. 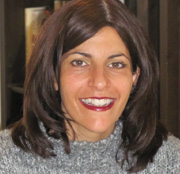 Originally from Ottawa, an excerpt from Gila Green’s new novel “King of the Class” is short-listed for the Summer Literary Seminars Award (2011). Her stories have appeared in tens of literary magazines in the U.S.A., Canada, Australia, Israel, and Hong Kong. Her short story collection, White Zion, is a finalist for the Doris Bakwin Award (Carolina Wren Press, 2008). Her stories have been short listed for WordSmitten's TenTen Fiction Contest (2008); The Walrus Literary Award (2006/7); the Eric Hoffer Best New Writing Award (2008) and the Ha'aretz Short Fiction Award (Tel Aviv, 2006). Gila has an MA in Creative Writing from Bar Ilan University (Israel) and a Bachelor of Journalism degree from Carleton University (Ottawa, Canada).