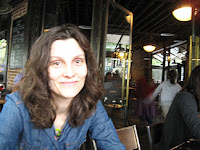 Bio: Holly Bauer-Ping grew up in Berwick, Maine, and currently works as a lawyer in Chicago. She lives with her boyfriend and three beloved cats. This is her very first writing contest entry.

WOW: Congratulations on your second place win in our Spring 2011 Flash Fiction competition! What inspired you to enter the contest, especially since this is your very first contest entry?

Holly: A friend had won a writing competition that I never would have thought of entering, and I wanted to see if I could do it too. I thought that having a deadline and other constraints, like a word limit, would be really motivating, and it was. I already had a rough draft of “Leave,” and when I came across the WOW! Flash Fiction competition, it seemed like a good fit.

WOW: Can you tell us what encouraged the idea behind your story?

Holly: I spent time in Montreal a few years ago, and I was inspired by the subtle difference in culture. I thought Montreal would create a good backdrop for a character like Winnie, who carries a series of conflicted relationships around with her and wishes she could start over. Louise is an amalgam of several people I met there, who are refreshing to be around because they are so relaxed and joyful in life.

WOW: I really liked the description of Louise in the story. Have you always enjoyed the genre, and how did you learn to write great flash fiction?

Holly: I can’t say I’ve always enjoyed the genre; in fact, I didn’t know it existed until a few years ago when friends introduced me to it—they were printing flash fiction on postcards you could subscribe to. I like the genre for the same reasons I like poetry—it has to be precise and condensed. And honestly, I write so erratically that the short format works with my limitations. I wish I had the time and attention span to commit to writing a sprawling novel, and I still hold out hope I’ll have the courage to commit to a project like that one day.

WOW:  We’d love to know more about your writing routines. Does it involve cafes, like your character, Winnie? Any favorite tools or habits that get you going?

Holly: Caffeine is definitely key! I have always kept a hand-written journal, but it's rare for me to write in public. And the habit comes and goes—sometimes I write almost daily for months, and then months pass when I don’t write at all. Sometimes I’ll think of a phrase I want to use for a story, or a character’s name, and I’ll write it down on the back of receipts or post-it notes, which end up in weird random places in my apartment. But on those occasions when I actually sit down to write something that has a middle, beginning, and end, I use a computer.

WOW: Sounds like you've found a way to make it work in your busy life. So, what's new? What projects are you working on now?

Holly: I drafted two short stories this year that I had thought of writing for ages, but I’m not sure how I feel about them—so I’m still tinkering. There’s a longer project I’ve wanted to write for even more ages, but to say I’m “working on” it would really be an exaggeration. But I still hold out hope for the surge of courage it would take to put it all together.

WOW: Thanks so much for chatting with us today, Holly! Before you go, do you have any tips for our readers who may be thinking about entering writing contests?

Holly: Each person has to discover what will inspire and motivate her, and seek those things out--they will be different for everyone. But once you have something that feels like a story to you, follow the rules, and revise a ton! And enjoy the process.