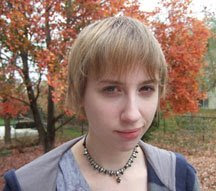 The Muffin welcomes third-place winner, Amy Perry, today to get her insight into her winning short story, "Ueno." Amy is a graduate student of Sociology at the University of Missouri - St. Louis, with a bachelor's degree in psychology. She is the mother of three cats: Sing, Neko and Stark. Although her work has been printed several times in UMSL publications, she is relatively new to the world of published work. Her submission to the WOW! Summer Flash Fiction Contest was inspired by a trip to Japan over the summer, where she had the good fortune to visit both Tokyo and Osaka and observe the differences first hand. (Both were fantastic, but Osaka remains her favorite.) The narrator of her entry is a recurring character of hers.

WOW: Welcome, Amy. We are so glad you could be with us today. So, the idea for your winning short story occurred when you were on a trip in Japan. Describe a little bit of your process from inspiration to final draft.

Amy: It's somewhat difficult for me to qualify the "moment of inspiration" because the process by which I go about writing is often so aimless. Sometimes I go into a story knowing exactly what it is I want to write about; while other times, I'll take the first word or phrase that comes into my head and just start writing. Most of the time when I do this, I end up throwing away what I've come up with, but occasionally it'll take on a life of its own.

With Ueno, I wrote it with the WOW! Flash Fiction Contest--and its size constraints--in mind. Having recently returned from Japan, the sights and sounds of the places I had visited were still fresh in my mind. My trip to Ueno Park was one of the strongest lingering images that Tokyo had left me with. My friend and I had taken the subway to Ueno but, because of the sweltering heat, left after a brief walk through the park. And yet despite the heat, there were these homeless men scattered throughout the park, sitting cross-legged on flattened cardboard boxes. How they were able to do it, I'm not sure, but the human spirit endures.

So, I knew I wanted to write about Ueno, and I knew I had about 500 words to work with. What can you say in 500 words? The narrator of my piece is one character, out of several, with a fairly well fleshed out personality and personal history. It's a voice I know well and can easily write in, which, with the deadline for the contest looming close, was a must. So, I just put the two together. Where could a teenage runaway go the night before hitching a ride out of town? I started with those three pieces--the setting, the character, and the circumstance--and worked from there.

I didn't do a lot of editing between the rough and the final draft. Rather, I edited while I wrote, and I wrote with an understanding of how many words I had to say what I wanted to say.

WOW: Just with your description in this interview, you make Ueno come alive. It makes me want to go there and witness it for myself. That's the mark of a good writer! How did you come up with your title, "Ueno?" Did you have any other choices?

Amy: Titles are always an afterthought for me. I know the titles are often what catch a reader's attention, but I'm not very good at them. Most often with my short stories, I tend to fall back on one or two words that link the entire piece together, usually a word that at first seems random, but after reading the story, gains a new significance.

WOW: I think titles are difficult for many writers, and most of us follow a process similar to what you suggested. Every once in a while, you will meet those people who have a title first. What are a couple challenges of writing flash fiction? Any advice for our readers?

Amy: Just getting started is a major difficulty for me. I can stare at a blank Microsoft document for hours if I let myself. And even if I have a thousand and one things I could write about, my fingers don't move. So with any story, but especially with flash fiction, where and how to start seems to be the key. You don't have the time to build your story up, so choosing the best place to start is a challenge.

Another is, of course, the word length. I have a tendency to over explain myself, in real life and in writing, because there is always this nagging voice in the back of my head that demands that everyone knows exactly where I stand. In flash fiction, you have to trust that your words and your readers can draw the line from point A to point B, without every minute step along the way mapped out in detail.

Advice is difficult for me to dispense because I'm not sure I'm in any position to dispense it. The piece I wrote for the WOW! Flash Fiction Contest was really the first time I wrote with such a short word requirement in mind. Starting out, I even googled "flash fiction" to make sure I had a decent idea of what flash fiction even was.

I guess if I were to give out any piece of advice, it would be this: know your characters. Where they've been, where they're going, and everything in between. Some of the best short stories I've written have come out of tidbits from a character's past that bloom into story lines I never would have thought of otherwise. Another piece of advice is to step outside your comfort zone. One thing I love about writing is the limitless opportunities for research it grants me.

WOW: That answer was full of great advice, Amy! I agree knowing your characters and letting them take you on adventures and places you never dreamed of is part of the fun of writing. This is something non-writers often don't understand, but I bet everyone reading this interview is nodding her head yes right now. In your bio, it mentioned you are fairly new to the publishing world. How did it feel to win third place in this contest?

Amy: It was a shock! Even more so because there seems to be some issue with my email account, so I wasn't even aware that I was a finalist until I was told I had won third place. So, I assumed my entry had been passed on. I want to thank WOW!, the sponsors, and Elise Capron. I am very honored and very flattered to have a place among such distinguished writers. I was new to WOW! when I first entered the contest, having only recently heard of it, but now I visit it virtually every day.

WOW: Well, congratulations to you again, Amy. And we are glad that you got that problem figured out with your email, so we could talk with you today. We are also glad to hear that you are reading WOW! on a regular basis. What are some of your writing goals for the future?

Amy: Basically to continue to get my name out there and continue writing. Between work and school, I sometimes have a tendency to put writing on the back burner (though it's always foremost in my thoughts), and I am endeavoring to give writing the same importance I give school and work.

WOW: I think a lot of writers struggle with those same time issues, and many of us are working on that in the New Year. Good luck to you! What other writing projects are you currently working on even though you are also a graduate student and mother of three cats? (very busy!)

Amy: I have no ambitious writing projects open at the moment. Of course, I have ideas for novels that I plan to use in the future, but right now I am focusing on writing short stories that revolve around a group of characters (the narrator of my piece being one of them) and submitting them to literary magazines with the hope that they will be published. My desire right now is to leak out and expose, little by little, this universe in my head to the world at large.

WOW: We are glad we had the opportunity to read about that world in your short story, Ueno. Congratulations to you again, Amy, and we look forward to hearing your name more in the future.

Interview conducted by Margo Dill, www.margodill.com, Read These Books and Use Them blog