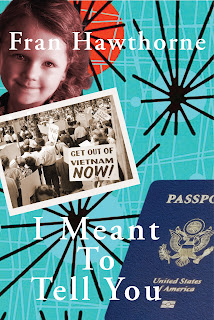 “Don’t drag down the narrative momentum by describing every single, ordinary action your characters take to get from Point A to Point B.” That’s a standard piece of advice for fiction writers. If Jane’s nitpicking sister, Lois, unexpectedly turns up at the front door while Jane is eating breakfast, there’s no need to mention that Jane put down her fork, pushed back her chair, and walked to the door—unless Jane’s particular style of fork-putting, chair-pushing, or walking reveals something significant about her personality. For instance, if Jane shrieks and hurls her fork to the floor, that could be a clue that she’s easily rattled.

So, according to the standard advice, the following would be a perfectly acceptable way to write the scene:

Just as Jane put her fork in her mouth, the front doorbell rang. When she opened the door, she saw her sister standing on the stoop.

I go a step further. I throw away “she saw” and simply let the reader see exactly what Jane sees:

Just as Jane put her fork in her mouth, the front doorbell rang. Her sister was standing on the stoop.

Isn’t that a lot more powerful?

Similarly, I avoid “she knew” “she remembered” “she noticed” “she heard” “she thought” and any other self-explanatory verbs.

But doesn’t the reader need phrases like “she saw” to understand what’s going on? Won’t it be confusing otherwise, as if Lois is floating in the middle of nowhere? Not at all. Since the reader is in Jane’s mind in that scene, who else would be seeing her sister?

As Jane watched her sister tug off her wet pumps and line them up precisely next to the coat rack. she remembered how Lois always used to discard shoes, coat, backpack – everything and anything -- haphazardly around whatever room she was in, when they were growing up.

Lois had tugged off her wet pumps and lined them up precisely next to the coat rack.
But when the sisters were growing up, Lois always used to discard shoes, coat, backpack – everything and anything -- haphazardly around whatever room she was in.

This technique works for both first person and close third person, no matter how many narrators or points of view are in the piece. All you have to do is put the reader right inside the head of whichever character is seeing, thinking, knowing etc. at that moment.

It might seem impossible to avoid those helper phrases 100 percent of the time. I confess that I slip up too often; “she saw” has been the default style of writing forever, and it slides into a sentence as smoothly as a cliché.

If you’d like, please use the Comments section to send me a short example where you think one of those phrases is vital, and I’ll see if I can “un-saw” it. It will be great practice for me.

* * *
FRAN HAWTHORNE has been writing novels since she was four years old, although she was sidetracked for a few decades by journalism. She’s written for The New York Times, BusinessWeek, and many other publications, and her eight nonfiction books have won awards from Library Journal and Foreword magazine, among other plaudits. But Fran never abandoned her true love: Her debut novel The Heirs was published in 2018, and I Meant to Tell You will be published in November 2022 by Stephen F. Austin State University Press.
~~~~~~~~~~~~~~~~~~~~~~~~~~~~~~~~~~~~~~