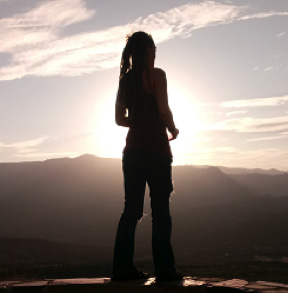 I will forever be in love with the guitar instructor who figured out how to play the opening music for the TV show "The X-Files" on electric guitar. How he was able to listen to the song, figure out the notes by ear, then he taught me how to play the theme music to my favorite TV show for an upcoming recital. That was decades ago. How decades later I still think it's cool the instructor could play the song by ear. Perhaps this is the epitome of engaged listening.

Consonants take up some space in my mouth and do that thing where they and parts of me make up words kind of like were we to sing.

That sentence is a joke.

That sentence is a joke in the sense that it just sounds ridiculous.

That sentence is a joke that is supposed to be an example of what not to do.

The following sentence is not a joke:

Consonants gather in my mouth, waiting to be sounded out by tongue by lips by a jaw making movement. And then the teeth for the end—to bite off a word, clip its ending. Words pushed out of mouth and I'm left with the feeling of the light vowels, instead of the cumbersome consonants.

I think of how musicians can figure out and play a song by ear. Notes that can be understood by an astute listener. Notes that create a language. What does sound say? As where the vibrations of strings guide one sound to the next. One motion of the hard to the next. The strum of experience. Thrum.

This is really about editing. How I can hear an essay and edit it by ear. Where I can recognize how this sounds weird. Move these beats of syllables to a different sentence to even out the pace and rhythm. I used to think about editing as a type of science or maybe math. The obvious metaphor of a puzzle and how we can push that concept just a bit further. Can figure out what goes where and what works well together to create a fuller picture. Or perhaps writing is a problem that needs to be solved. The solution is found in the method of approaching it.

Follow my ear through each word. Trust that you'll know yes. That's it when you hear it. The subtle differences not just in meaning, but sound, too. Scroll, flip through a thesaurus until you hear the right term. Now run with it. Pace yourself. Get into the rhythm of language.

Now sound something out. Best technique tip I ever received from another writer: read your work out loud. Or even better: record yourself reading your essays, then listen to the recording for pauses and inflections and pace and rhythm and all of those things our creative voices want to sing.

Informative section of this column:

There are many software programs you can use for free to record yourself reading. Some even read for you.

What all of this means: listen to yourself. Listen to the ways in which you put paragraphs together in order play. Hear the words of your writing and keep aware of the sounds on the page. Edit by ear.

Chelsey Clammer is the award-winning author of Circadian (Red Hen Press, 2017) and BodyHome (Hopewell Publications, 2015). A Pushcart Prize-nominated essayist, she has been published in McSweeney’s Internet Tendency, The Normal School, Hobart, The Rumpus, Essay Daily, The Water~Stone Review and Black Warrior Review, among many others. Her third collection of essays, Human Heartbeat Detected, is forthcoming from Red Hen Press. You can read more of her writing at: www.chelseyclammer.com.