Dive In By Doodling

Fleshing out a character can be fun... and sometimes, it can be a bear.

My current WIP is on its 2nd main character switch. First it was a boy (based on a former student). I've never been a boy, so I switched it to a girl (again, based on a former student) who really didn't struggle with anything, so I made her a cutter. I've never cut, so I switched to the current main character--a girl who struggles with acne and depression (those are things I have dealt with) who's also been adopted. (That's me too.)

This girl likes to doodle. I liked to sketch when I was a teen (mostly John Lennon or horses), and I still like to zentangle. I figured I might try to intersperse an occasional drawing into the story.

I started with an image in the middle of each sketch. An eye. A girl's face. A mouth. A bed. 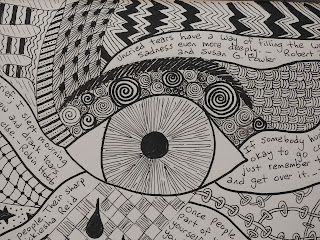 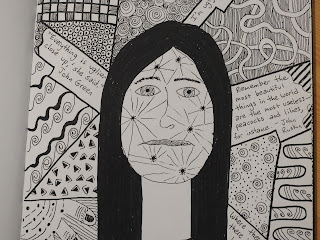 Something strange (or at least unexpected) happened as I searched for quotes. I'd find quotes I liked (me--a 60-something-year-old woman), but I'd think about them and reject them.

Why was I dismissing some of the quotes? After all, they were inspirational. They were deep. They resonated with me. Why not include them in my drawings?

The quotes got tossed aside because they didn't ring true with my character--my teen character. I was learning more about "Maggie" with each quote I rejected and with each quote I accepted. I would dive into her head (created by me) and see what sayings swirled and swirled around in her brain... and didn't slosh out. The ones that stayed--I considered those keepers

Here's an article (with levity) about how art can help writers (at least scroll down and watch the 24-second video on the showman who makes naan-making an artform)  and another article that talks about why it's a good idea to combine writing with another art.

I have writing friends who knit. Some create jewelry. Some are photographers. Some paint. They're all creative activities, and from what I've read, they can all help us as writers.

What (art) do you do--other than writing? And how do you think it helps you in your writing? Zentangling minds want to know...

Sioux Roslawski is a freelance writer, a middle school teacher and the proud author of Greenwood Gone: Henry's Story, a historical novel about the Tulsa Race Massacre. If you'd like to read more of Sioux's stuff, check out her blog.