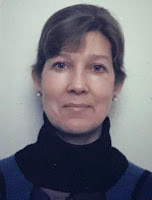 Frances Hider is a creative nonfiction writer who has a particular interest in the overlap of nature with art and literature, science and medicine. Her essay, “The Unintentional Contortionist” won the 2016 Frankenstein Workshop of Creation, Writing Competition. Her essays have appeared in the Tyne & Esk Writers anthology, From the Lighthouse, and online with the Scottish Book Trust as well as with the Institute for Advanced Studies in the Humanities’ “Dangerous Woman Project” through Edinburgh University. Frances lives in Scotland.

WOW: Congratulations on winning first place in our Q4 2021 Creative Nonfiction essay competition! What prompted you to enter the contest?

Frances: It is an honour to be a part of the WOW! community. I entered the contest to make a contribution but also to put my writing out into the world.

I am delighted to have won the essay competition. “Safe Haven” is a very personal take on life. Entry to the contest was an opportunity to share not only my thoughts but also to put my style and my writer’s voice to the test.

WOW: Your entry, “Safe Haven” is beautifully written. What inspired you to write this particular piece?

Frances: I wrote “Safe Haven” as a reaction to a moment at a particular time. My husband had recently died and life was out of synch. I hadn’t processed what I knew intellectually — his death, versus what I felt emotionally — his loss. In the space between the two was an overwhelming sense of unreality. It was this distortion of being and the interaction with the deer, which inspired my writing.

I felt kinship with the roe deer who, out of her familiar haunt sought haven in an unfamiliar terrain. In writing about her and our garden, in fleshing out the descriptive details of the trees and undergrowth, finding humour in my efforts to move her on, was to see what was usual and familiar in a new way.

The death of my husband seemed to subvert time. In crafting the essay, I tried to relay the notion of timelessness. Writing about this feeling of being out step with time in the context of my encounter with the roe deer, addressing the tangible versus the intangible, the familiar and the unfamiliar, as well as the past and the present, was a way to make sense of the moment and realise a future.

As a writer, the challenge was to take the very personal and consider the dialogue with the reader. Although I established the structure and tenor of the piece in a first draft, the final essay was achieved through multiple edits.

WOW: My sincere condolences for the loss of your husband. Your essay covered all of the themes you've mentioned in a poetic and ultimately powerful way. What is your writing process like? Please describe a typical day.
Frances: My day depends very much on where I am in an essay or writing project. I write, plan or read towards an essay idea most days even if it’s just for half an hour. I am project rather than time focused but once I have an essay in progress, I work for about five hours a day with a break every hour or so. I have a lovely cocker spaniel who reminds when it’s time to move!

Often, I will start the writing day by reading a poem or a paragraph or two of another writer. I choose something, which reflects the tone or pace of what I’m working on. Sometimes, I read for language but cautiously to avoid being overly influenced by another writer’s combination of word choices. When I was writing “Safe Haven”, I read from John Clare’s “The Shepherd’s Calendar” or Lia Purpura’s “Rough Likeness” for the lyrical mood they engender.

I am at my most productive and clear sighted in the mornings. This is when I might tackle a difficult idea or paragraph. I also reread and edit the previous days writing.

In the early stages of developing an idea, I research different aspects of my subject. For “Safe Haven”, I read up about roe deer in this part of Scotland. For something more speculative, I seek out not only facts but also poetic, literary and historical references. Sometimes, a reference will trigger an idea or give direction to an essay.

I like to write from as informed a perspective as possible and from primary sources. I generally have a lot of information to hand, which I don’t need or edit out. However, I think knowledge of a subject embodies the final narrative in some unspecified way but also in choice of language and imagery. Although I’m usually impatient to get writing, research and background reading are important aspect of my process, and ones I rather enjoy.

I don’t keep a daily diary as such but I do keep a journal open on my desk where I jot down dated notes, ideas and experiences as soon as I can. Sometimes it’s just an interesting word I’ve heard on the radio or it might be a paragraph and the start of an idea.

Writing for me isn’t as neat and tidy as I’ve made it sound. Research and writing often overlap. I also edit and rewrite each piece several times. I think of my writing process as similar to rock climbing, all the hand and foot holds are there but it takes practice and effort to make the right moves. Sometimes it’s a struggle to get from start to finish but it’s nearly always worth it.

WOW: Thank you for sharing so much of your process, it's inspiring! What are you reading right now, and why did you choose to read it?

Frances: After my husband died I lacked concentration to read more than a page or two at a time. This was a disappointment as the written word, the convolutions of language and a well plotted story have always been a comfort and a pleasure. However, I did listen to audio books. The one I would particularly mention is “Featherhood”, by Charlie Gilmour, which is not only a skillfully told story of a boy in search of his father but a beautiful insight into the relationship between the author and a wild bird.

Thankfully, I am now able to read on a regular basis and usually read more than one book at a time. At the moment, I’m half way through, “Landmarks” by Robert MacFarlane, which I chose because it is about both landscape and language.

I’m also dipping in and out of “Modern Love”, a compilation of some of the essays in the New York Times column, edited by Daniel Jones. I chose this book for the variety of different voices, approaches to story and interpretation of love.

I share drafts of my work with a few trusted friends, also writers, and in turn read and comment on their writing. Just now, I’m nearing the end of the draft of a friend’s novel.

I always have books on the shelf that I’m looking forward to reading. Currently, I have several by Richard Mabey, which part memoir, part nature writing, I chose for interest as well as insight into another writer’s approach to the countryside.

If I was to recommend a book, it is “The Last Wolf” by Jim Crumley who through fact and mythology tracks the demise of the last wolf in Scotland and the ecological consequences. It is a fascinating and at times lyrical insight into the misconceptions held about wolves.

WOW: Thanks so much for chatting with us today, Frances. Before you go, can you share a favorite writing tip or piece of advice?

Frances: My writing tip is twofold, to practice as much as possible and to be open to trying out different writing forms, even if an alternative approach seems challenging.

By way of example; I have just completed an online introductory course to podcasting with the brilliant Rhonda J Miller, reporter and producer for WKU Public Radio, in Bowling Green, Kentucky. Apart from sound production and recording my own voice (the challenging bits) writing to be heard influences structure and language choices in ways I hadn’t previously considered. I may not become the best podcaster, although I rather enjoyed it, I gained a practical insight into a writing form I would otherwise have been unaware.

It’s been a pleasure and a privilege to share my writing and thoughts with WOW! Thank you very much for asking me.

For more information about our quarterly Flash Fiction and Creative Nonfiction Essay contests, visit our contest page here.
Marcia Peterson at 12:30 AM
Share