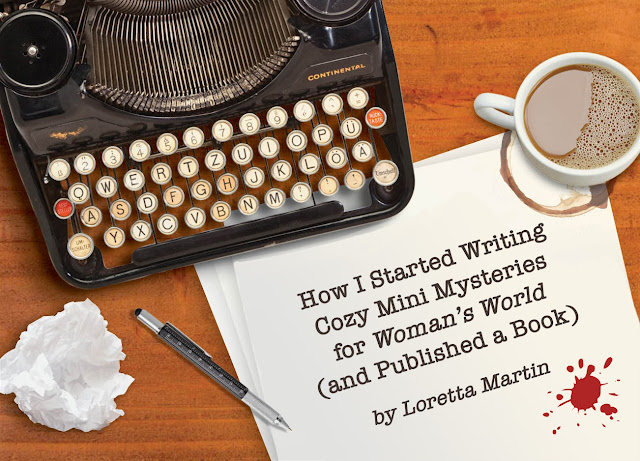 By Loretta Martin
“Mystery is at the heart of creativity. That, and surprise.” ~ Julia Cameron
I think of cozy mysteries, a subgenre of crime writing, as felonies for fun. A mini cozy, then, is like flash fiction—short yet completely satisfying.
Years ago, I edited drafts for a romance author whose work appeared in Woman’s World (WW), a weekly national magazine (readership: 5.5 million). I bought issues to see the final version of her stories. Later, I bought them for the solve-it-yourself cozy mini mysteries.
As a diversion from my own writing, I began submitting stories to WW. In February 2019, they accepted “Deadly Misstep,” followed a month later by “Mother’s Day Charm.” The 550-word limit, including the solution, helped hone my editing skills. 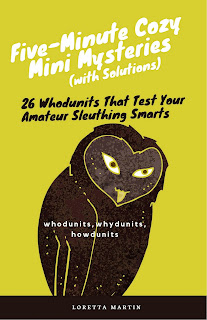 So far, eight of my mysteries have made it onto WW pages, with another due out late October. Others are in my book, Five-Minute Cozy Mini Mysteries (with Solutions): 26 Whodunits That Test Your Amateur Sleuthing Smarts. (Memo to Self: Work on “mini”-mizing titles!)
If you’re interested in submitting your own cozy mini mystery to WW, read on.

Like traditional mysteries, cozies turn crime into feel-good, light-hearted reading experiences. Other draws are
• occasional humor
• relatability (characters and situations)
• opportunity to expand minis into longer forms or a series
• income potential (WW pays $450, which is subject to change.)

They feature the same components found in “hardcore” whodunits:
Plot/action: A perp/villain commits a crime against a victim. The protagonist/sleuth follows clues and dodges false leads to solve the case. Cozies differ in two ways:
1. They might incorporate good or tender acts (secret admirer sends love notes to object of affection).
2. Felonies often have “harmless” consequences (Aunt Betty’s heirloom gravy boat goes missing after the family Thanksgiving dinner).
Characters: Protagonists, usually female, are everyday people (librarians, shop owners, parents) or small-town officials. They apply common sense, deductive reasoning, and good memory, sniffing out an alibi that smells like a compost pile. They don’t rely on high-tech forensics. A quirky partner, family member, or pet can add comic relief. The victim might be unpopular, deemed to deserve their fate. Number of suspects is limited to three.
Setting: The story’s set in a Main Street community or other idealized setting where bad things rarely happen. Everybody knows and trusts one another. The timeline’s compact—24 to 48 hours.
Clues and red herrings: Hints must be contained in the story, along with misdirects meant to throw off protagonists and readers.

Is there a formula or structure?

An outline should include
• protagonist/detective (and sometimes a partner)
• crime/act (what happened, who did it where, when, and how; any one could be the plot thesis)
• victim(s)
• motive (the why)
• up to three suspects with alibis
• at least one clue
• red herring
• solution

Cozies should be family friendly. Off-limit areas:
• Graphic violence: Somebody stabbed Old Man Wingate, but blood-and-gore descriptions are no-no’s.
• Vulgar language: Profanity? F-bombs? Verboten.
• Explicit sex: Nope (tactful allusions to the act and to infidelity are permitted).
• Animal endangerment: Cousin Roy might get whacked, but nobody lays a hand on Rover or Kitty.
Note: WW steers clear of paranormal, fantasy, and sci-fi themes.

Are cozy mysteries easy to write?

Unfortunately, I have no experience with “easy” writing. Competition’s tough, even for longtime pros. Keep the following in mind:
• Read several issues and follow submission guidelines before hitting “Send.”
• Know audience demographics.
• Dissect stories. Identify each element, noting tone and language style.
• Avoid character names starting with the same letters.
• Avoid controversy; readers are seeking entertainment and escapism.
• Keep plots plausible. A theft at an Amish nursing home’s unlikely; the Amish take care of their elders.
• Pay attention to detail. In my story “Deadly Misstep,” the perp tried to blame the victim’s death on an accident, claiming she discovered the body. (“I can still see that look on his face.”) In fact, she pushed the victim down a flight of stairs, where he landed face-down.
• Include a motive. It’s easy to cover who, what, when, where, and how but overlook why.
• Avoid convoluted plot twists.
• Provide time shifts for clarity (“later that day,” “the next morning”)
• Keep point of view and verb tense consistent.

What are some writing pitfalls?

Submission editors frown on poor grammar, misspellings, and incorrect usage. Take a hack saw to
• bloated verbiage and redundancies
• adverb overuse
• too many prepositional phrases
• excessive passive voice
• abrupt shifts in verb tense and narrator voice
• misplaced modifiers (“danglers”)
As for self-editing, tread carefully. Spellcheck and editing software aside, after multiple drafts the brain tends to see what should be there but isn’t, and miss what’s not there but should be. A fresh set of objective eyes minimizes such risks.
When your story’s polished and ready, email it as an attachment to Fiction[at]WomansWorldMag[dot]com with “Mystery Submission” as subject. Expect turnaround time of two to six months.
Happy writing!
*** 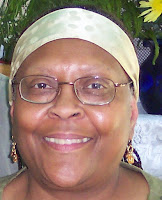 In addition to Woman’s World, Loretta’s fiction has appeared in Every Writer, Short Fiction Break, and Oyster River Pages. Her lifestyle articles and advertorials have been published in regional press. “The Birthmark” received honorable mention in WOW’s Spring 2021 Flash Fiction contest. If you haven’t already, check out her book on Amazon. Visit her website at wordygirly.com.
WOW! at 1:30 AM
Share