A Cat Hair and a Post-It by Chelsey Clammer 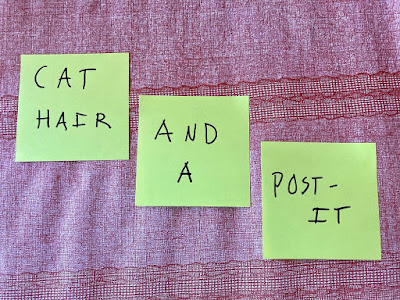 So, being a writer, I do this thing where whenever I think of an interesting sentence or a line just enters into my head because I’m a writer and odd lines are always coming into my head because, being a writer, I look at the world oddly, I write down these little lines and bits and quirky sentences and whatnots that come to me and later on I’ll use them as prompts. Life gets busy and does its busy life thing, but I make sure that every day I sit down and write something new for at least 10 minutes. If I don’t know what to write about, which usually is the case because I never know what to write about until I start writing, I pull out my list of odd lines, close my eyes, and blindly point to the piece of paper a la Cher in Mermaids with her atlas. Wherever my finger lands, that’s my prompt. Set a timer for 10 minutes. Go.
I did that today, and my prompt/odd line was: “I have a cat hair in my Post-It.”
10 minutes.
Go.
Wait, what? 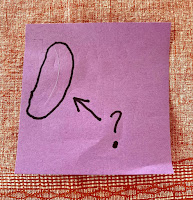 This is the kind of moment when I become curious about my head. I have a prompt here, but no recollection about what prompted the prompt. I guess there was cat hair in a Post-It note? And I found that instance as noteworthy? But how can a cat hair be in a note? Did I mean on? Either way, I don’t have a cat. So I do not presently agree with my past self. What in the what kind of line is that to make future-me write about for 10 minutes? That’s just mean.
This is about challenges. About prompts that prompt nothing in me but curiosity about my own brain and why I thought that random thought was noteworthy. Or where that thought came from. Or where the cat hair came from. Or perhaps this is about the fact of past moments holding no meaning or intrigue in the present tense. And how perhaps this is true for all of life. What felt significant in the past is now a non-thing in the present.
Once, I was really drunk at a Tori Amos concert in 2009 and felt a rush of life convening with meaning as she played the song “Hotel” and screamed this ending lyric a few times: “I’m still alive.” She screamed and screamed it and I was like “Hell yeah!” and in that moment it felt like my life had purpose or strength or resilience or just a hell yeah! sense of aliveness. So, right after the show, I slurred my way to a tattoo parlor with my friend who was at the show with me (who wasn’t really a friend but an organic farmer from Virginia who had a song for every vegetable and who crashed on my couch for two months longer than the two nights she said she was going to crash on my couch for and who also at one point melted my vibrator when I was out of town), and I bought her a tattoo of a crow on her shoulder and got myself that yelled lyric permanently written on my chest: “i'm still alive.” I asked for the “I’m” to be in lowercase because I thought that was a way to resist the patriarchy.
I don’t know what I was thinking during any of that. 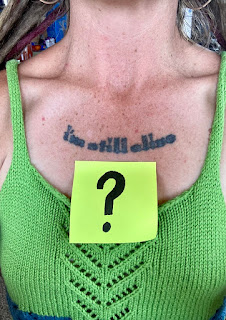 Though, past-tense Chelsey was correct: I am still alive.
And, past-tense Mother made an excellent point when she saw my tattoo: “One day you’re going to make a coroner laugh his ass off.”
Also, interesting note: I took a break from these 10 minutes of writing to see if I could find a video of that concert. Of that specific song. I did. Thanks, YouTube. I listened to it, hoping to re-discover the passion I felt that night for that specific screamed lyric. However, I discovered that Tori Amos wasn’t screaming when she sang that lyric. It was just a softly sung line. A murmur, really. Nothing grand. Thus, no passion presently felt.
And so I live permanently with a past moment that no longer feels important—or really contains any sense—to me in the present tense.
Like how at one point I thought it was important to note there was a cat hair in my Post-It. I might not understand my head or where the cat hair came from, but at least it led to an anecdote, to a great reminder as to why I no longer drink, and I accomplished my goal of writing for 10 minutes today. Go team.
Point being: Start a list of odd lines. You never know what will come from them.
***

Chelsey Clammer is the award-winning author of Circadian (Red Hen Press, 2017) and BodyHome (Hopewell Publications, 2015). A Pushcart Prize-nominated essayist, she has been published in Salon, Brevity, McSweeney’s Internet Tendency, The Normal School, Hobart, The Rumpus, Essay Daily, and Black Warrior Review, among many others. Her third collection of essays, Human Heartbeat Detected, is forthcoming from Red Hen Press. Chelsey received her MFA in Creative Writing from Rainier Writing Workshop. You can read more of her writing at: www.chelseyclammer.com.
Chelsey is also a WOW! Women on Writing instructor. Check out her upcoming workshop, Curiosity and Creative Nonfiction starting August 16th!
Angela Mackintosh at 1:30 AM
Share