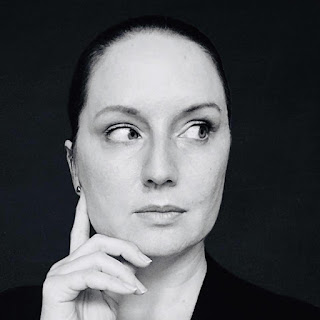 Holly Rae Garcia is an author and photographer. Growing up, she remembers reading her mother’s extensive Stephen King and True Crime collection. A love for dark fiction with sad endings has stayed with her ever since. Her own books include Come Join the Murder, and The Easton Falls Massacre: Bigfoot’s Revenge. Her shorter fiction has been published online and in print for various magazines and anthologies. Holly lives on the Texas Coast with her family and five large dogs. More information can be found on her website and Twitter.
----------interview with Sue Bradford Edwards ----------
WOW: Tell us about the inspiration for “Even the Jellyfish.”
Holly: I wrote the story initially for a prompted contest hosted by the Australian Writers' Centre. The prompts were: "The first and last words had to begin with the letter J, had to include the phrase 'missed the boat', and a game had to be played. It ended up long-listing and, after a few edits, I submitted it to Women on Writing. For the story itself, I have a short-term memory issue, so memory and loss are always at the forefront of my mind. The setting is local to where I currently live, and the beach has always been a place for me to find peace and just "be."
WOW:  The setting definitely feels real so I'm not surprised that it is one of your special places. What problems do you look for when you are rewriting? What might need to change in a story?
Holly: I look for voice continuity between characters, any plot holes, realistic dialogue, and overall tone. I tend to go "white-room" when drafting, so edits often include adding in sights/sounds/smells/sounds/etc. I have the five senses listed on the wall beside my computer, to remind myself to include them. Under-writing that first draft is often a problem for me.
WOW: Underwriting seems like a natural problem to have when trying to write short. Given the brief length of a flash story, every detail has to serve a purpose. How did you determine which setting details to include? Why did you make these particular choices?
Holly: I wanted to emphasize how it felt at the beach, in the water, on that specific day. The senses play such a big role in memory, so I knew I needed to focus on those specifically. For the later scenes set in the present, I tried to only sprinkle enough that the reader knew where they were. Because the point of the story was in the past, not the hazy present.
WOW: As someone who writes both novels and flash, what advice do you have for our readers about moving between different types of projects?
Holly: Personally, I find it productive to work on longer and shorter works at the same time. I feel like they engage different parts of your brain, and if you're stuck on one, you can procrastinate by working on the other.
WOW:  That sounds like a good way to move between the two. A lot of our readers have never written flash fiction. What advice would you have for someone who is contemplating her first flash story?
Holly: I'd say to at least give it a try. You may hate it or you may love it, and find yourself writing more than ever. I do a lot of things in my life, just to see if I can. Sometimes I don't enjoy them, but sometimes I do and they stick. I tried writing, just to see if I could. I wrote a bigfoot short story for my husband (which we later turned into a novella) to see if I could. That short story sucked, but the process was addicting. I still can't do it as well as others, but that's the good thing about these personal goals...you can shift that goal line however you need to, to keep going.
WOW:  I feel like I can speak for the WOW community when I say that I'm glad you kept writing.  Thank you so much for encouraging our readers and helping them gain insight into your process.  Good luck on your current projects!
Sue Bradford Edwards at 12:00 AM
Share