Letting Go of the SPECTACULAR 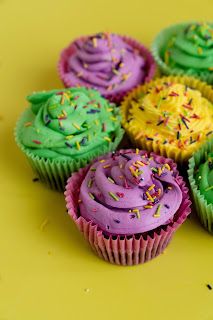 Lent starts tomorrow and so I had Matthew Kelly on the brain.
Kelly is the author of quite a few Christian books; he’s also a motivational speaker and just in general, a down to earth guy who’s very relatable when it comes to the spiritual. And so I often jot down his interesting talking points, which explains the note on my desk. It was all caps with the words, “SEDUCTION OF THE SPECTACULAR.”
It doesn’t, however, explain why I posted this note on my calendar for a Muffin topic. That’s for this Mardi Gras Tuesday, so have a slice of King cake (or a cupcake!) and see what you think.
Oh, how I’ve been seduced by the spectacular when it comes to my writing career! And I suspect that lots of writers succumb to that seduction. We want the SPECTACULAR!
The sale to a FAMOUS MARKET!
The acceptance from a well-known AGENT!
The publishing contract from the BIG NEW YORK PUBLISHER!
The prestigious, notable AWARDS!
But what if our writing career never reaches those lofty heights?
Hmmm. It’s hard not to get caught up in the seduction of the spectacular because we live in a society that celebrates the AWESOME, the HUGE, the SPECTACULAR achievements. The not-so-spectacular achievements that make up most writers’ careers? Not so much. And I've been as guilty as anyone else.
My books are with a foreign educational publisher; they’re well-produced and I was well paid. But when writer friends asked about them, I’d respond, “Oh, they’re just in the educational market.”
When I had a column in a local magazine, I’d say, “It’s just a regional thing.”
My anthology essays or stories would get the same treatment: “It’s just Chicken Soup for the Soul…”
Just. Just. Just. They just weren’t SPECATACULAR enough.
That’s what the seduction of the spectacular does; it makes us feel like it’s only the big, important, amazing parts that matter. While nothing could be further from the truth.
All the parts…the no-fee acceptance, the first paid (!) acceptance, the first speaker gig to a group of seven writers who’d never heard of you…all those accomplishments make up the whole of a writing career. Not to mention the hundreds or thousands of hours and dollars invested before our writing starts paying off.
And I don’t mean paying off in a SPECTACULAR way. Because the other truth is, many of us will never reach those big, amazing writer achievements. And sadly, many will give up, because their dreams and their reality don’t match. If they can’t be SPECTACULAR, then never mind.
But others will persevere, and perhaps without even realizing it, the seduction of the spectacular will lose its grip. That’s what happened to me, and if you’re lucky, it will happen for you.
You can be the writer who makes an impact in your own, perhaps less-than-spectacular, niche. Because when you embrace the just-right-career for you, there’s not just fulfillment but TONS of joy! And that’s worth celebrating with another slice of King cake (or a cupcake!), don’t you think?
~Cathy C. Hall
Cathy C. Hall at 12:30 AM
Share