It’s true confession time, y’all. I’m having an affair. And it’s been going on a loooong time. 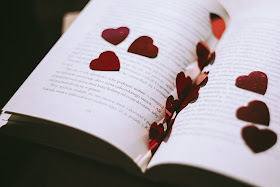 It all started when I was about eight years old. That’s when I learned to read and fell in love with words. Big words, little words, hard words, easy words. Words could make me laugh out loud, and sometimes, words could bring me to tears. Words were—are—endlessly fascinating to me. I especially love origins, of individual words and of phrases. And today, since earlier this week marked the first day of winter, and since I’m a little snowed under (see what I did there?) with holiday baking, I decided to share a little of my romance with winter words.
As pure as the driven snow:
This is a somewhat old-fashioned expression meaning pure, but it’s a lot older than you think. First, you’ll want to know that driven snow is snow that’s been blown into drifts, and that snow is very clean and purely white. The first use of the expression can be found in texts around the start of the 19th century, but the idea of purity associated with snow is way older than 1800. Would you be surprised to know that William Shakespeare first brought that imagery to play goers way back in The Winter’s Tale in 1611? To wit, “Lawn as white as driven snow.”
Walking on thin ice:
Yep, old Will was quite a prolific wordsmith and we can thank him for many expressions. But of course, there are other well-known writers who’ve gifted us with winter idioms we still use today. Like “walking on thin ice.” (Or “treading on thin ice,” or “skating on thin ice.”) It’s an expression that even a Southern girl who’s never seen thin ice can understand, namely that one is on dangerous ground, metaphorically speaking. It was first seen in print in the essay, Prudence, by Ralph Waldo Emerson: “In skating over thin ice, our safety is in our speed.” Makes perfect sense!
Jack Frost nipping at your nose
I’m not sure how old I was before I realized that Jack Frost was a name and not just a crazy way of referring to frosty weather. So who the heck is this Jack Frost fellow, anyway?
Turns out, he’s not a fellow at all. Jack Frost is a personification of winter, based on Scandinavian traditions—maybe. There’s also plenty of evidence that Jack Frost has English roots, dating back to 1734 in a book called Round About Our Coal Fire or Christmas Entertainments. Except Jack’s not a character there but instead just a colorful phrase for winter. Skip ahead to the 1800s and Jack Frost takes on some serious personality when he jumps the pond and lands in America, most notably in an1861 political cartoon by a fellow named Thomas Nast. Sound familiar? Yep, he’s the guy who gave us the first drawing of Santa Claus as we know him today.
Oh, how I love a good story about words! And I love you, dear writers, who take the time to read my words. To paraphrase that wonderful romantic line, “You make me want to be a better writer.”
~Cathy C. Hall, wishing you happy holidays and all the best in 2021!
Cathy C. Hall at 12:30 AM
Share