Telling The Stories Of Our Veterans 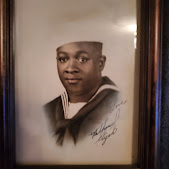 My Late Uncle Nathaniel Who Was In The Navy

I am from a family of Veterans. I have loved ones, old and young, including my husband, eldest son, and nephew, who've answered the call to service, during wartime and peacetime. I honor and appreciate them all, and all Veterans on this Veteran's Day, and every day, and also pay homage to those who made the ultimate sacrifice for this country with their lives.

My maternal grandfather died when my mother was just a little girl. The stories I heard about him were secondhand, and I never saw a photo of him because old family photos had gotten lost during a move. With my imagination and the stories I did hear, I pieced together my own loving grandfatherly profile of him as a child. One of the stories that will always be imprinted in my mind is the one my mother told me about her last memory of her father. After months of being deployed, he had to leave his tour of duty when he became sick and was sent back to the states. He was admitted to a Veterans Hospital back home and my mother visited him with my grandmother. She was shy in his presence, she hadn't seen him in such a long time. He talked to her from his hospital bed and handed her a paper napkin off of his lunch tray that he wrote her name on. My mother said she held on to that napkin wherever she went, until it disintegrated and had to be thrown in the trash. Even now, I can visualize the smile on her face from that memory; that simple but profound connection she had with her father who'd been gone for months in a war ravaged country. It's a story I have written about in an essay but is one I would love to eventually write about for a children's picture book.

And then there are the stories from my father. He never talked openly about his experiences in the Army. I remember watching war movies with him and I often wondered how close they resembled his own experiences. I regret that I never asked him. I though was lucky enough to find letters he wrote to my mother while stationed overseas during the Korean War. Whenever I read them, love letters to my mother, when she was a newlywed, reassuring her that he was okay, and would be coming home, I choke up wondering if those words were meant to also reassure himself in the midst of combat. His letters inspire me to write a fictional love story between a young soldier and his wife; the difficult lessons the soldier learned about humanity, the lessons the wife learned about her resilience, and all they endured and overcame during their separation.

Whenever I reflect on my uncles, I smile when I think about my younger uncle who loved to tap dance. I always wonder if he entertained his fellow soldiers with his fancy footwork to lighten everyone's load during their darkest times. And when I think about my eldest uncle who was in the Navy, I remember with sadness that he died in a drowning accident during his tour of duty. His death was always deemed suspicious because he was an excellent swimmer. A soldier friend of his who attended his funeral also told the family to look into his death. At that time the Armed Forces remained racially segregated in most service units, so fowl play could have been a possibility. Remembering that story, I've searched the archives for information about my uncle; records and other documents, hoping one day I'd find something that would give me the closure I needed, what my grandmother and family never had. I've written about him also but I know there is so much more of his story to write about.

Our Veterans have a narrative from being on the frontline that is powerful, proud, painful, conflictive, even traumatic, that as writers we can help tell. Whether we write their stories down as essays, fiction, or even a children's picture book, their stories are meaningful and teaching moments for all. It's a way to acknowledge their profound voices and a way to say, we see and hear them, and want to play a vital role in sharing their experience in all of its octaves, the good, the bad, and the ugly so others never forget about the sacrifices they made, and what they bore not just physically but emotionally.

Today, join me in thanking a Veteran for his or her service, and honoring Veterans who are no longer here. Get inspired to write if you write picture books by reading, "H is for Honor," by author Devin Scillian, illustrated by Victor Juhaz; an alphabet picture book about the military, or "The Wall," by author Eve Bunting, illustrated by Ronald Himler about a young boy and his father visiting the Vietnam Veterans Memorial. Do some research and listen to the oral narratives of the Tuskegee Airmen, the first African-American military aviators in the United States Armed Forces, or research how women's roles in the military have changed and how many courageous, dynamic women have risen in ranks, and pen a nonfiction article for a magazine. And if you have a Veteran in your family, active or retired, ask if he or she can share their story, so that you can share it with the world.

Jeanine DeHoney has had her writing published in various magazines, blogs, and anthologies. Her latest essay will be published in the Winter Issue of the online literary anthology, "Please See Me."