When a Loss is a Win

Yesterday I got the initial results of WOW’s most recent essay contest. I had not made it to the next round. Again.

This piece that didn’t pass muster is close to my heart. It’s organized to echo the format of one of my favorite essays: Joyas Voladoras. It’s on a topic I’m passionate about: racisim. I really wanted it to snag at least a runner-up spot.

It didn’t. To advance, it needed a score of at least 14. The pieces were scored on subject, content and technical aspects--each was worth 5 points. Mine earned only 11 points.

About 6 months ago, I entered my first WOW contest. It was also an essay that was close to my heart. This one focused on postpartum psychosis. I have two friends who have daughters that suffered from it. One killed her three children, in the span of three years. She’s been in prison for 30 years. The other friend’s daughter shot her husband, and her baby daughter. She then killed herself.

Both pieces would have shed some light on an issue that’s important to me. Getting a large audience to read them would have been wonderful.

However, this time (just like the previous time), I got a critique as part of the package. Earlier, a friend paid for the critique. When I entered recently, I paid for a critique. I mean, how often does a writer get feedback (other than from their writing group colleagues)? We might get a rejection email. We might get no response, which means a no. But rarely do we get specific constructive criticism.

Lucky for me, I got several pages of feedback. Some of it spoke to me needing to tighten my piece. Some of it tried to school me on the use of ellipses. (The audacity! Doesn’t everyone know that the ellipsis is king? It should be used as often as possible… at least once every other sentence.) But, a lot of the critique involved lines being crossed out--parts that weren’t really necessary to the piece.

And double-lucky for me: I got the same judge to critique my piece that I got last time. I know it’s random, but my earlier feed-back was so spot-on, when I paid for the feed-back this time, I had a wish: I hope Chelsey critiques mine again. Without even knowing if she’d be involved in this round of essays… (See? Ellipses are always welcome and appropriate.)

I’ve heard many of my respected writer friends froth at the mouth over workshops they’ve taken with Chelsey Clammer. I can see why. If her suggestions are any indication of her talent as a teacher and a writer… well, I can see why she’s able to inspire so many pieces into existence. (Chelsey: I know you’re rethinking the ellipsis thingy. You’re warming up to embracing pieces with 42 ellipses, right?)

Even though I failed to earn a spot as a runner-up, I’m calling myself a winner. I got an incredible start at reworking my essay. I also got something I’m planning on using in my classroom. When my students write essays this year, I’m going to put Chelsey’s crossed-out version of my essay up on my smartboard… to show my classes that sometimes we love our words, but there’s always room for improvement. 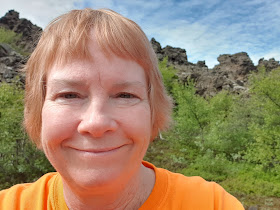 Sioux is a middle-school teacher by day, and a failed contest writer by night. Lately, she's found great success at falling asleep (sitting upright) on the couch, her laptop in her lap. If you'd like to read more of her stuff, head to her blog.
Sioux Roslawski at 2:06 AM
Share