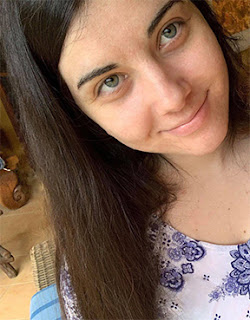 Chloe has had a passion for storytelling ever since she could first form words. Whether that be unsuccessfully convincing her mother that it was her brother who spilt paint on the carpet, or missing the bus because she was off building her own worlds, not much has changed since she grew up. Chloe is now bringing stories to the screen as a Producer and Director of children’s and adult animation in Sydney, Australia.

Unlike the mad world of animation, Chloe enjoys the solitary gauntlet that is trying to put pen to paper. Sir Arthur Conan Doyle put it beautifully when he said that “a book is a mummified soul.” Unfortunately, writing one isn’t so beautiful and is just as excruciating as it sounds, but whether it be on the train, in a meeting, or it’s three o’clock in the morning, Chloe would be rather doing nothing else.

Excited to further explore her writing career, Chloe is working on her first manuscript, hoping to fulfill her ten-year-old self’s dreams of telling stories to anyone who will listen.

Take a minute to read Chloe’s story, “The Quiet that Follows,” and then come back to enjoy this chat with the author.

WOW: There is a story behind every story. Can you tell our readers what inspired “The Quiet that Follows”?

Chloe: I have always been interested in the different way death is perceived in different cultures. The one I was most familiar with growing up was the Grim Reaper, which is always depicted as a sinister and foreboding personification of Death. But why should death be seen as cruel when it only makes us appreciate our impermanence?

WOW: At first, readers assume Renfri is hunting the deer to feed her people. Only later do they realize she is a different kind of huntress. How did this surprise develop during the rewrite process?

Chloe: I always like leaving the reader something to think about toward the end of my pieces, so I knew early on that I wanted the reveal to come at the end. My hope is that in misleading the reader into believing Renfri is human, and therefore sharing a similar experience of death, the reader would be forced to challenge their perception of it once it is revealed that she is Death. I don’t believe that I would have achieved the same impact if I had introduced Renfri as Death earlier in the piece as the reader would not instinctually empathise with her.

WOW: In your “day job” you produce and direct animation. Can you tell our readers a bit about it and how this work shapes your writing?

Chloe: I have been in animation for seven years, mainly in management roles, but recently I have had the amazing opportunity to flex my creative muscles in the director’s chair. Animation is obviously a very visual medium, so in my work I have to have clear direction on character’s movements and actions when working with animators. I think this translates into my writing style as I tend to use verbs rather than adjectives and like to emphasise action. I do often find myself being excessive with my stage direction though, which I try to be conscious of.

WOW: That's good advice for all of us especially if we write things that will be animated or illustrated.  What advice do you have for writers who are hesitant to attempt flash fiction?

Chloe: It can be intimidating trying to structure a story with deep and complex characters in less than two pages. If you’re unsure how to tackle the challenge, I would suggest approaching it as if you were writing the first two pages of a story you have always wanted to write, or better yet, the final two pages. Your characters will then feel as if they have developed over, and survived, an entire book. Flash fiction is also an amazing exercise on restraint and saying more with less. I like to think that instead of me being paid per word, I’m the one paying.

WOW: That's excellent advice on working with flash characters. What else are you working on? Where can readers find more of your work?

Chloe: I am a chronic project-ditcher. I have plenty of starting chapters and story outlines but no real completed pieces (yet!). That is why I find flash and microfiction so fun and rewarding, because it isn’t as daunting as a 350-page novel. The projects I’m currently working on are a high fantasy novel and a series of single-shot scripts, which are like flash fiction but in film form. I have only just begun to delve back into my writing so I don’t have many pieces under my belt, but I have plans to launch a blog soon.

WOW: Don’t we all have files full of story beginnings? We’re so glad that flash and microfiction are rewarding for you and, in turn, for our readers! We are looking forward to seeing more of your work in the future, especially getting to see your scripts as films.

Interviewed by Sue Bradford Edwards who refuses to disclose how many abandoned first chapters she has on her desktop. Sue is the author of over 25 books for young readers. To find out more about her writing, visit her blog, One Writer's Journey.