How Movies Can Inspire Our Writing 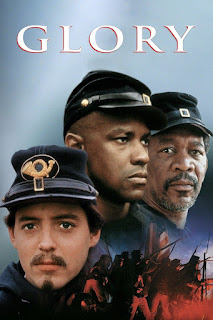 Sometimes I listen to movie soundtracks when I’m writing. It’s nice to listen to something sweeping, emotional and dramatic in the background, but that doesn’t have words when I’m copy editing or working on writing an article for an upcoming deadline. One of the soundtracks I favor is the one for the film “Last of the Mohicans.” I had just moved to the North Carolina mountains as a teenager when filming was taking place for that movie, and I’ve hiked along many of the trails featured in the cinematography.

Because my daughter has walked in on me listening to the opening strains of “Promontory” from that soundtrack, she came to ask me if I wanted to watch the movie with her for a school assignment in American History.

“You have to watch that movie?” I asked her. “It’s good, but it’s pretty hard to watch.” She showed me a list and said she had to select two to watch. My eyes zeroed in on the movie title “Glory.”

“That one,” I said. “That’s the one you should watch first. But it’s also a tough one.”

When I told her the plot, the true story of how a Civil War Union soldier named Robert Gould Shaw took the job of leading the first African-American regiment, she agreed. As we were discussing this, I remembered that I had a poem somewhere in my files that I dashed off after the first time I had viewed the movie. Sure enough, I dug out a zippered portfolio where I keep hard copies of some of my older writing.

We watched “Glory” last night, and my husband joined us because somehow he’d never seen the movie. Once he heard Matthew Broderick, Denzel Washington, Morgan Freeman and Andre Braugher were in it he didn’t need much convincing.

I’m not going to lie. We were sniffling throughout the whole movie, downright sobbing in other parts. The men in the 54th Massachussetts Volunteer Infantry only wanted to fight, and they were marching around in worn-out boots with no socks, getting called every name in the book and being paid less a week than their white counterparts. They were told if they were captured by any Confederate soldiers, they would be killed instantly. So would Col. Shaw or any of his other commanding officers. They soon learned the infantry was only supposed to be completing menial tasks and manual labor, until Col. Shaw stood up and fought for their right to . . . basically fight. The movie concludes with the battle at South Carolina’s Fort Wagner.

As my daughter put it, it showed a part of the Civil War that she had never learned about in school. And through our tears, I pulled out the poem that I wrote after I first watched the movie at age 18 or 19. I can honestly say I’ve never been one to enjoy watching any period films about wars. But something about the story behind “Glory” touched me so much, the side that showed which side of the war was battling for the rights of enslaved people, that the words poured out on paper:

My day has come and gone

My soul lies in the sand below

As we marched along the ocean shore,

I carried the flag as it waved

Triumphantly in the air

the red of it mixed with the

And we said goodbye to those we loved

As we laid our lives down one final time

The words embraced us from inside

And we will remember them so long

We will remember them so long

Has a movie or TV show ever inspired any of your own writing?

Renee Roberson is an award-winning writer and editor who also hosts and produces the true crime podcast, Missing in the Carolinas. Learn more at FinishedPages.com.