Do You Do This? (And How It Can Make You a Better Writer) 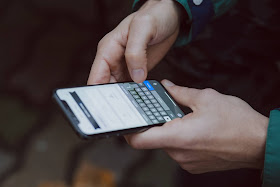 Do you do this?

You’re plopped in front of the TV or screen of your choice, watching a favorite program—maybe it’s a series like Outlander or a paranormal investigation or a classic comedy like The Andy Griffith Show—and you see an actor or hear an historical tidbit or watch something outrageous and your mind begins to wander with all kinds of questions. And suddenly, swoosh. You pick up your cell phone to get more information.

I’ve met a lot of writers over the years and though they write anything from haiku to horror, they tend to have one trait in common: curiosity. And thanks to technology, we don’t have to sit around wondering whatever happened to the actor who played Otis, the town drunk. Or when exactly was the Jacobean era? And perhaps most importantly, has anyone ever found Bigfoot poop?

It’s all right there at our fingertips, a veritable goldmine of facts (and sometimes conjecture). But what does any of this have to do with becoming a better writer? Here are the handy steps to get you there:

Step 1: Falling Down the Rabbit Hole Pays Off

Often, when I begin a simple Internet search, I end up twenty minutes later, thinking, “Huh. That would make a good nonfiction picture book. (Or article, or short story, or even a novel.)”

But the trick to finding that idea is to explore beyond the obvious. Consider the other day when I was watching a paranormal investigation of a saloon somewhere in the Old West. There was a connection to Wild Bill Hickock and the narrative zeroed in on his infamous murder and the blood spilled at the gaming table. But an hour later, I was more shocked by what I’d found out about Hickock’s life than his death, and that led me to Buffalo Bill Cody and his Wild West Show, and on to sharpshooter, Annie Oakley and another endlessly fascinating cohort, Calamity Jane.

Now, I already had a general knowledge about all those people but I wasn’t there for general facts. I was more curious about the outlandish and the unusual, the whys and hows behind these larger-than-life characters. Sifting through the dry facts, you’ll eventually be rewarded with a sparkly nugget!

So there you are, a sparkly something whipping around your brain and a tingly feeling in the pit of your stomach. Oh, this is good, you’re thinking, and you can’t wait to start writing. Except you really should. Because someone else may have snatched up that gem first.

Fortunately, you’re still sitting there, cell phone in hand. A quick search will tell you if the great idea you want to write about is already out there. But to be clear, it’s not that you can’t write about a subject that’s already out there. In fact, it’s pretty darn hard to find a topic that hasn’t been written about…I mean, you found the information, so obviously, someone has written on your subject. But you have to be like the starship Enterprise, boldly going where no writer has gone before. Find that, and you’re on your way!

Just when you were feeling a wee bit guilty about all that sitting around, that nagging voice known as your conscience is silenced and all your hours and hours of binge-watching and scrolling on your phone have been justified. You’ve mined a great idea! You’ve verified that no one else has expressed this idea in the brilliant way you’ve imagined! You will be that better writer!

All you have to do now is write.


~Cathy C. Hall (Who may or may not have a brilliant idea pertaining to the DNA analysis of Bigfoot poop and the hitherto unknown scientific talents of Calamity Jane.)
Cathy C. Hall at 3:30 AM
Share