There Will Be Blood

Once upon a time, in a land not so far away, there lived a writer named Sioux. She spent hundreds of hours carefully crafting a story… the lyrical lines… the sensory images. Sioux was in love with her picture book manuscript, all 2,782 words of it--

Screee! What? Your picture book is almost 3,000 words long? That’s sooo long, the kid will go to sleep in the middle of it, and when the story is finished being read aloud, the kid will have graduated from high school. Good grief! That is much too lengthy for a picture book.


The above fairy tale is totally true. I’ve had a picture book manuscript gathering dust for at least 15 years. I was in love with it. There’s a long, not-happily-ever-after story about it involving a small publisher who is now on the “writer beware” list. Suffice it to say: I was elated, I was then crestfallen, so I put aside the project for what I thought was forever.

Fast-forward to July of 2020. I got a nudge from Margo Dill. “You’ve purchased a picture book editorial package a while ago. Remember? I’m booked through the end of this month, but would you be interested in sending me a manuscript at the beginning of August?”

Me: Sure. I have a picture book that’s 2,700 words long. (I shaved off the other 82 words… kind of like how I ignore the weight on my driver’s license, that’s about 20 years old and a ton too little.)

Margo: Usually picture books are 1,000 words or less. (Translation: That is going to be a hot mess for me to critique. I’ll have to go in with a flame-thrower and set the thing ablaze if there’s any hope of getting rid of that many words.)

I felt Margo’s shudder even through her email. I smelled the sweat circles start to form in her armpits. So I reexamined my story… and I started cutting.

1. Using contractions in some spots. “I would” became “I’d” when it fit with the tone and the rhythm of the piece. Of course, this is the opposite of what I’ve done during some NaNoWriMos. There was one November where I didn’t use a single contraction because when a writer is working on amassing 50,000 words, every single word counts.“I will” is two words. “I’ll” is only one.

2. Condensing time. My story takes place over 9 months. In the earlier draft, I impressed myself over how I included sensory details about each season. I patted myself on the back each time I read it--with each seasonal scene, I had created a rich world for my main character. Unfortunately, when major cutting and slashing has to be done, time has to be shrunk. Spring and summer were now covered in the same paragraph. Fall segued into winter in a sentence or two, instead of a couple of paragraphs on each one. After all, there isn’t much difference between spring and summer, and snow is the big difference between fall and winter. Condense and combine!

3. Show not tell. Forget the gorgeously-written descriptions. Show through a few, tightly-written phrases. After all, the illustrations (hopefully) will fill in some of the story details.

In short, drastically cutting a piece involves blood. You have to go in ruthlessly, with a sword machete, and do major slashing. Does my story still have moving moments... or is it now a disjointed mess? Did I do a passable job of keeping the storyline intact?

And most importantly--will Margo be able to come in on a white horse and save my manuscript?

(Like with all fairy tales, to find out how it ends, you'll have to wait until we get to the last page of the story... so this story will be continued later. If you'd like to read about some more suggestions on how to slice and slash your work, check out this article.) 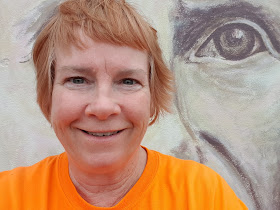 Sioux is hoping there will be a happily-ever-after with her picture book manuscript. (Her middle grade novel? That's a longer tale, frought with more obstacles.) If you'd like to read more of Sioux's stuff, check out her blog.
Sioux Roslawski at 1:42 AM
Share