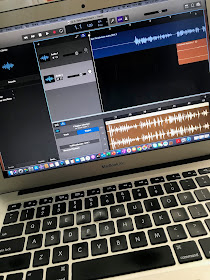 This past week, as I worked on the script for a podcast episode, I had a terrible case of Imposter Syndrome. While researching the story idea, I found out other true crime podcasts had covered the same topic. One used the same book I was reading as the basis for her episode. Even though I was already several pages into the script, I seriously considered giving up.

Then I started thinking about all the investigative crime shows I watch on television, like “48 Hours” and “Dateline NBC,” and all the different spinoffs of Investigation Discovery shows. There are some stories that get told over and over on these types of shows, but it doesn’t keep me from watching them if I recognize the case.

The trick, I told myself, is finding your own angle. After all, as a magazine editor, the angle is what I advise writers to find when working on their assignments. Is someone writing an article about a new bakery in town? What’s the angle? Oh, the owner is a trained pastry chef specializing in French treats who has baked for three different United States presidents? (True story, by the way). There’s the angle.

When I was working on a podcast script about a disappearance in Hilton Head Island, South Carolina, I watched an episode of the Investigation Discovery Show “Hometown Homicide” while I was working on my script. I recognized the show uses a formula—they delve into three different “theories” and sometimes insert fictionalized or composite characters into the mix. When I scheduled the interview with one of the authors of a book about the mystery, she and I discussed her being interviewed for that TV show. She had no idea they were going to change the names of real people on the island and disagreed with the way the show was edited. I made sure to provide a variety of questions for my own interviews so I could make sure this retelling of the story was different from other shows I’d seen about it, while still staying true to the facts.

So once I talked myself out of how much I sucked as a podcaster this week, I thought about my angle. The podcast episode explores a man named Larry Gene Bell, who was executed for kidnapping and murdering two young girls in South Carolina in the mid-1980s. There have been a lot of podcasts and TV shows (and even a made for TV movie) about his crimes. What I wanted to explore was three women who went missing from my town in the 1970s and 1980s when Bell actually lived here. He was never conclusively linked to the women’s disappearances but there have been journalists and law enforcement that have speculated. I started off the episode by talking about the three women and then segueing into Bell’s crimes. I hope the point of difference made for an intriguing episode for listeners.

If you ever find yourself stuck with any type of non-fiction writing (articles, personal essays, blog posts) stop for a minute and brainstorm what you want your angle to be. Once you narrow that down, I guarantee you’ll have an easier time getting the words out and down on paper.

Renee Roberson is an award-winning writer and magazine editor who also hosts the true crime podcast, Missing in the Carolinas. Learn more at missinginthecarolinas.com.
Renee Roberson at 3:00 AM
Share