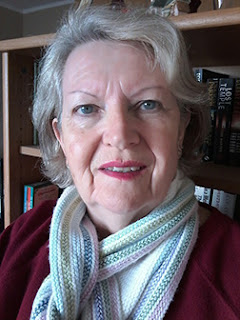 Dawn Rae lives in Cape Town, South Africa where she is a church secretary (because someone has to pay the bills) but belongs to three different writers’ groups (because that’s where her joy lies). She shares her home with Plum and Honey, cats-of-great-character! Dawn loves books and has been an avid reader all her life, dipping into her mother’s books from an early age. Over the years she has written many poems, short stories and business articles, some of which reached publication. Dawn has self-published four books: Rory’s New Coat, a children’s book; Milestones, a collection of short stories; The White Glove and The Parrot’s Apprentice, two of the novels she wrote through the annual international writing event NaNoWriMo (National Novel Writing Month). Dawn enjoys crosswords, Sudoku, jigsaws and playing board games with a group of ladies, although that’s on hold during Covid-19. She avoids domestic stuff whenever she can, but so far she has not managed to teach the cats to cook. Connect with Dawn by email at dawnrae1611[at]gmail[dot]com, on Twitter at @DawnRae1611 or find her on Facebook under Dawn Melodie Rae.

Read her magical story here and then return to learn more about the author.

WOW: Hello, Dawn, and congratulations! “The Keeper of the Keys” is a fantastical and unique story. Can you share a little with us about how you came up with the idea for it?

Dawn: I love writing prompts, especially the fantastical and unique, and I find a lot of what intrigues me on Pinterest. This story grew from a prompt we used at a writing group, "Someone finds an unusual key." As a writer I love fantasy--magic and dragons and suchlike--so it was a no-brainer the story would go that way. Stories, for me, simply present themselves and demand to be written. Sometimes it's a vivid dream, at others it might be a first line or a name. In this case, Surmeil's name jumped out at me from the back of a truck I was stuck behind in traffic. That's why I have paper and pens everywhere :)

WOW: I love how you found that name, and it fit perfectly into the story. You belong to three different writers’ groups. What are some of the most valuable lessons you’ve learned during your time with those groups?

Dawn: The groups I belong to are each unique. The main one, West Coast Writers' Circle in Cape Town, has about 30 writers of all levels and genres. My involvement is in a giving capacity, serving in various roles over the years. I love this group because I get to present workshops and writing exercises to stimulate their creativity. It's such fun! But for me it's about giving back and encouraging other writers. Plus I grow with every exercise or workshop I prepare, as well as those given by others.

I also belong to Romance Writers of SA (ROSA) Cape Town chapter, not because I write romance as such but because I so enjoy those ladies. They range from newbies to seriously published, mainstream and indie. I can't begin to tell you what I've learnt from them, from the simple 'Get your bum in the seat' to a detailed road plan for self-publishing. (Which I have yet to follow, she sighs).

And then there's the small group, three or four ladies who get together monthly to share and discuss our writing. I absolutely recommend being part of a small group. These groups have a limited lifespan and that's okay. I've been part of two previous small groups and had just arranged a new one when the CV19 lockdown hit. I look forward to 'after' when this group can really get going again. It's in small group that I am held accountable for promises I make and deadlines I set myself. Once, someone in small group read a story I'd written and said, 'Dawn, you're capable of so much better than that.' I'm forever grateful to that person. You don't get raw, honest feedback like that too often.

I think the most useful advice I ever had came from someone in my first small group, 'Ignore the word count, just write the story.' Because I love contests and flash fiction, this was really valuable to me. I also still hear voices from the past whispering, 'Info-dump...' and 'Cliche!' and I smile as I ring the changes.

WOW: You’ve published two books that you created through NaNoWriMo. Are you a writer who needs a hard and fast deadline in order to complete a project?

Dawn: I am totally deadline driven. The adage, 'If it wasn't for the last minute, nothing would get done!' was written just for me LOL! And there's another... 'A task expands to take up the time available for it.' I confess I'm a lazy writer, adept at excuses cleverly disguised as good reasons. But November... ah, how I love November.

Plum and Honey are chalk and cheese. Cliche I know, but that best describes them. Plum is 14 and an absolute cuddle-bunny. She's an SPCA girl and for the first 2 yrs I had her she never made a sound--not a meow, not a purr. Now, she purrs and cuddles with wild abandon. Honey is also a rescue, 4 yrs old, but a more ornery girl you've never met--doesn't want to be touched or held unless she's ready, and then for a very short time. I'm currently sporting scrapes from when she decided my hand was a sworn enemy LOL! Yet I love them to full capacity and wouldn't trade them for anything. Except maybe chocolate. No... not even for chocolate. But as writing companions, they're useless. All they do is sleep...

WOW: Tell us about your books Rory’s New Coat and The White Glove and Parrot’s Apprentice.

Dawn: Ah yes. Rory was an experience in vanity publishing, a term I knew nothing about back then. It was a contest entry that didn't win but was 'so good you really should publish it...' Mind you, I do believe it's a good children's story, well illustrated and produced, and those who bought copies agree. But I did end up with many copies in my garage which I've been able to pass on to worthy causes like Santa's Shoebox and several libraries. An expensive lesson but one well learnt now. Briefly, it's the tale of a ladybird who wants to be different but who discovers different isn't always better.

In The White Glove, Lady Eleanor marries against her will, but at the wedding her husband accidentally ingests a poison intended for her and she sets out, with her childhood love, to seek the fabled antidote. With The White Glove I was more conservative, printing in much lower numbers and reprinting when needed. White Glove was also an important lesson in Nano. I completed my Nano 50,000 words but hadn't finished the story... and it took me another year to do so. (Did I mention I'm deadline driven?) Now, I strive to get the whole story down, knowing I can go back later and flesh out.

And Parrot's Apprentice, ah, I really love that book. It was such a joy to write, and I've had excellent feedback from readers. Is it okay to have a favourite amongst one's own books? Well, no matter, that's my favourite. It's the tale of Artemis, an inept wizard because his mentor has been turned into a parrot and it's difficult to teach magic when you don't have hands. Into their lives comes Myra and her father who is currently a rat, for which she blames Artemis. They need to find a witch to change him back so they set out together - Myra and the rat, Artemis and the parrot, and of course, their cat. There has to be a cat.

I intend having these books up soon for sale as ebooks, but in the interim anyone who's interested can email me at dawnrae1611@gmail.com and we'll make a plan.

WOW: I absolutely think it's okay to have a favorite, book story, amongst ourselves. Thank you for chatting with us today and for sharing what inspires you. Happy writing!