Is It a Great Opening? Try the Barking Dog Test 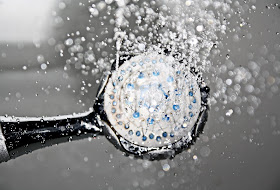 I was taking my shower, thinking about this week’s blog post; specifically, I was thinking about what makes a great opener in a novel. And then Libs the Tiny Terror’s barks rang out through the house!

I hate when I’m in the shower and Libs starts barking. If it’s a short and sweet bark, then I can relax. But if it’s a constant LOUD ruf-ruf-ruf-ruf-RUF, then of course I’m spiraling straight into some horrific scenario reminiscent of Psycho. And so I have to jump out of the shower and find out what’s going on out there.

And as I headed back up the stairs, still dripping (and P.S. There was no one outside my house, wielding a weapon), I thought that’s it! A great opener is like a dog barking while you’re in the shower! You have to find out what’s going on. (And fine, thanks to Libs for the inspiration.)

So on to great openers that have passed the Barking Dog (while-you're-in-the-shower) Test.

Sometimes, a great opener to a novel is the first line. The classic and oft-used example of a first line that grabs the reader immediately comes from E.B. White’s Charlotte’s Web:

“Where’s Papa going with that ax?”

When we read that first line, about an ax (Ironic, right?), we are instantly drawn in and want to know what’s going on. I mean, an ax never bodes well for man nor beast.

An opening killer line (no pun intended), whether it’s a novel, short story, or even a magazine or newspaper article is an art. And trying to come up with that spectacular hook of a line can keep you from getting on with it. So if that amazing first line doesn’t come to you, move on to writing the great opening paragraph (where you’ll often find the hook at the end).

You may have a favorite, and perhaps you’ll find it among one of these cited in “Literature’s Greatest Opening Paragraphs.” For my money, you can’t beat Shirley Jackson’s The Haunting of Hill House:

No live organism can continue for long to exist sanely under conditions of absolute reality; even larks and katydids are supposed, by some, to dream. Hill House, not sane, stood by itself against its hills, holding darkness within; it had stood so for eighty years and might stand for eighty more. Within, walls continued upright, bricks met neatly, floors were firm, and doors were sensibly shut; silence lay steadily against the wood and stone of Hill House, and whatever walked there, walked alone…

That paragraph sends shivers down my spine. But especially those last few words “…whatever walked there, walked alone…” I have to know. What in the holy horror is going on in Hill House?

But sometimes, more is needed to suck the reader into the story; sometimes, it takes a whole chapter, or maybe a prologue. There are plenty of terrific examples here, too, but if you need just one novel where the first chapter introduces just about everything—premise, setting, protagonist, conflict—and still makes you scream, “WHAT IS GOING ON HERE?” then read (or re-read) Suzanne Collins’ The Hunger Games. It’s a stunning hook of a chapter (and why it was on the NYT best-seller list for 260 consecutive weeks)!

Perhaps you’re not doing a lot of writing quite yet but you can become a better writer right now. Research great openings and read, read, read. Dissect the sentences and the paragraphs and the first chapters to see what makes them work as un-put-downable openings. And then hope and pray that your library has these books available to download ‘cause I promise you, it will be just like the dog barking while you’re in the shower.

(P.S. What’s your favorite opening in a novel? Or put another way, what book am I going to try to download today?)