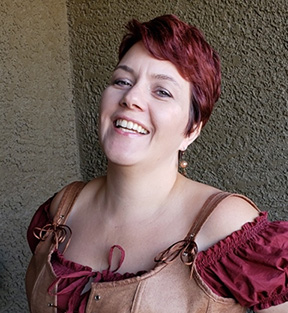 Courtney Harler lives, writes, and teaches in Las Vegas, Nevada. She holds an MFA in Creative Writing from Sierra Nevada College, where she received the Two Pines Award for Outstanding Creative Work. She has been honored to receive additional support from Writing By Writers, the Community of Writers at Squaw Valley, and the Nevada Arts Council. Courtney’s work has been published by many fine literary magazines around the world. A full list of Courtney’s publications and awards can be found at courtneyharler.wordpress.com.

Read Courtney's award-winning entry, "Still," and then return for an interview with the writer.

WOW: Welcome, Courtney, and congratulations again! Looking over your bio,  it's clear you are skilled at composing and executing flash fiction, having been published in numerous literary journals and being nominated for the coveted Pushcart Prize more than once. What do you think makes for a compelling flash piece?

Courtney: Effective flash can be centered on a place, person, or particular moment, but generally, for me, it’s the intensity of emotion that drives my stories, and the shorter the piece, the more intense the emotion. When I set out to write a new flash story, I try to strip away any element that doesn’t drive toward that emotion, whatever it may be. All unnecessary details seems to fall away as I work toward the core of the story. That said, I often have to begin by exploring a secondary emotion, like anger or confusion, then use the writing itself as a process of discovery. Once I discover, or uncover, the true purpose of the story, I revise from that perspective. In the end, truly good flash is the product of innumerable rounds of conceptual revision, followed by then reconsidering every word, every punctuation mark, every phrase, every tab or line break, because the writer of flash has so little room for error. For me, there’s a very fine line between prose poetry and flash fiction; however, while I think flash should be somewhat lyrical, it shouldn’t be too obviously so. Overall, it’s a dynamic, difficult form—fun to write but hard to get right.

WOW: Having attended a LOT of conferences, what was the very first writing conference you ever went to and how did it spark your interest in attending more?

Courtney: The first formal conference I attended was a weekend workshop in the San Juan Islands in 2015. It was called a “Sea Kayak Writing Adventure,” taught by Pam Houston with Writing By Writers. I had never been in a kayak, much less on the open sea, and I was also a relatively new (creative) writer at the time. I flew to Bellingham, Washington, then took an air taxi to the islands. I suffer terrible motion sickness, so all of this travel was uncomfortable for me, but once there, Pam helped me find my groove, both on the water and in the “classroom.” In fact, we kayaked to a new island each day, then did generative writing exercises perched on driftwood. The weekend proved an adventure in every sense—we saw orcas up close (maybe too close, they swam right under our kayaks), and I began to see how my writing practice could work in the world. I’ve been to many longer conferences since, but based on this initial experience, I always search for some natural element, for something to both ground and inspire my writing. I love to travel to write—I like what breaks loose in my mind when I become physically unmoored—but sometimes it’s too much at once, and I need some solace, some peace, to get the words on the page.

WOW: That sounds like an absolutely amazing first writing conference experience. I like that you seek out experiences specifically with that natural element. You also work as a freelance manuscript editor. What are some common issues you see come up a lot in this line of work? (I’m sure we can all learn something here!)

Courtney: When we write, there’s always a gap between what we are trying to express and what the reader perceives as our expression. I try to coach other writers into exploring that gap, into finding the message only they can send. My mentor, Alan Heathcock, taught me something very vital about originality in literature, which I try to impart to my clients and students. Alan said that originality wasn’t about cleverness, about being “different” from everyone else, but about telling the story only you can tell. He would always say, “You are not a cliché,” and damned if that didn’t hit my heart every single time he said it. Back then, I think I needed to hear it said, loudly and frequently, and now I’m sure others need to hear it too. I do all levels of editing except ghostwriting for that reason—I believe everyone has the right to their own voice, to their unique story. They may just need a good mentor/coach/editor to help them discover it. So, the most pressing issue, in my freelance editing experience thus far, is the gap, be it on the line level or the global level. Once the writer can bridge the gap, all the other elements will start to fall into place.

WOW: You were the recipient of a Professional Development Grant from Nevada Arts Council for Napa Valley Writers’ Conference in Summer 2019. What was the grant application process like for you and what project did that help fund?

Courtney: The process is fairly straightforward: it’s an online form wherein applicants detail the proposed event, its purpose, and its projected costs. The Professional Development Grant is specifically designed to help artists travel to workshops, residencies, and conferences. Last year, I used my PDG to offset the costs for Napa, but I’ve used it for AWP and other travels in the past. The Nevada Arts Council actually offers many types of grants, all of which promote art in the local community. It’s a wonderful organization, and I am immensely grateful for their yearly support.

WOW: What themes do you find yourself exploring again and again in your work?

Courtney: Well, there’s almost always an animal, and that animal is often dead. I’m sure that’s from being raised on an organic farm in Kentucky, from being exposed daily to the facts of sustenance and sacrifice. Additionally, I feel a deep pull toward the land—its terrible beauty and solitude—but I am also a social creature who loves her creature comforts. I feel trapped, sometimes, between worlds urban and rural, and I often write into that liminal space. Also, many of my stories have a Southern Gothic vibe, because the place of my upbringing is still an emotionally fraught mystery to me. Animals are a big part of that coming-of-age story, of my growth into adulthood, particularly motherhood. Like many writers, I yearn for the past, for its simplicity, yet fear it, for its inscrutability. Sometimes, as a supposedly “mute” character, or as a fellow sentient being, or as a symbol, an animal can say what I cannot. Landscapes, too, if they accrue enough significance, can also speak for me that way.
Renee Roberson at 3:00 AM
Share