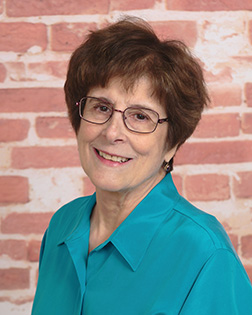 Armed with a geology degree from New York University, Elizabeth Maggio moved cross country to begin her writing career as the science reporter on the Arizona Daily Star in Tucson and then as science editor at the University of Arizona were she founded a research magazine. After picking up a degree in Italian while at the university (“someone had to speak the family language properly”), she packed up and headed to Turin, Italy, where she worked as a bilingual science editor for an Italian aerospace company. That experience led to a position as consulting science editor for the Vatican’s astronomical observatory.

After retirement, Elizabeth switched to writing fiction and discovered that making up the facts was surprisingly harder than documenting the facts in her science reports.

With encouragement from a fellow writer, she entered and won a short story contest. Emboldened, she entered the WOW flash fiction contest and has won various awards over the years. Her flash fiction inspiration often comes from the novel she’s working on, an archaeological mystery set in Italy.

If you haven't done so already, check out Elizabeth's award-winning story "The Talisman" and then return here for a chat with the author!

WOW: Congratulations on placing in the Spring 2019 Flash Fiction Contest! What excited you most about writing this story?

Elizabeth: I was excited—thrilled—to be able to use the plot element I had tried so hard to make the central focus of the archaeological mystery I’m writing. No matter how hard I tried, it just didn’t work in the novel, and yet the idea of being able to touch an old object, in this case, the roof shard from an ancient Roman site, and be connected with the past haunted me. As I often do when I’m stuck on my novel, I turned to flash fiction and it worked in my story. At last, my orphan plot element had a home!

WOW: Excellent news! And I love the idea that flash fiction is both an amazing standalone genre and a useful tool for other genres. What did you learn about yourself or your writing while crafting this piece?

Elizabeth: The big take-away from writing “The Talisman” was to relax. I knew that the little girl would have an imaginary friend but I had no idea how the story would play out. Would the friend be real or make-believe? I didn’t know, and I was getting anxious as I neared the end of my story. Once I let go of my anxiety, the ending—a shadowy friend—just happened.

Elizabeth: Oh my. Overcoming my facts fetish—I built my reputation as a science writer on accuracy—is still hard and slows my writing down, especially for a novel based on a real archaeological site with lots of documentation available. Just this morning I was writing a chapter that dealt with the way the sanctuary site had been looted in the past. I wanted to know the “who, what, where, and when” of this looting, what happened to the found items. When I should have been moving my story forward, I wasted time researching and trying to pound the square facts into the round holes of my story. Ugh.

WOW: I can see how that would be a challenging occupational habit to overcome!

Elizabeth: Making up the facts should be easy, but I find it difficult to pick and choose and edit the facts and make up new ones to suit my story. Maybe I feel guilty. I try to remind myself that I’m writing fiction now and to not let the facts get in the way.

P.S. Not one to waste good research, I’ve filed away my facts and built up a large stockpile of interesting material for blog postings related to my novel (when I get around to creating a blog).

WOW: That’s an amazing idea! And such good motivation to create that blog soon! Thanks for sharing that process with us. What are you reading right now, and why did you choose to read it?

Elizabeth: I just finished A Wrinkle in Time by Madeleine L’Engle. When the movie came out last year, I decided to read the book first because it had a magical/sci fi theme. But I couldn’t get into it. Recently I wanted to stream the movie, so I gave the book a second try and enjoyed it.

WOW: If you could give your younger self one piece of writing advice, what would it be and why?

Elizabeth: “Liz, don’t try so hard.” Don’t stake your story on a particular plot element that’s caught your fancy. You’ll end up going around in circles unless you let it go.

WOW: Great advice! Anything else you’d like to add?

Elizabeth: Writing flash fiction is a great way to take a break from a longer project, especially if you’ve hit a stubborn writing block.

WOW: That’s also great advice! Thank you again for sharing your stories and for your other thoughtful responses! Congratulations again, and happy writing!

Interviewed by Anne Greenawalt, who keeps a blog of journal entries, memoir snippets, interviews, training logs, and profiles of writers and competitive female athletes.
Anne Greenawalt at 3:00 AM
Share