The Layers and Shapes of Disquiet (International Literary Program) 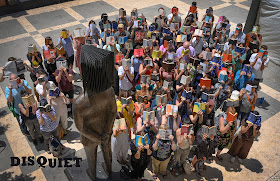 For me, the 2019 Disquiet International Literary Program in Lisbon, Portugal was about three words: layers, shape, and Sophia. If I’d taken the two weeks on my own to go to Lisbon, I would have enjoyed the city, especially the restaurants that let you sit for hours until you beg to pay your bill, the mosaic paths, tiled walls, Fado music, funky bathrooms, and the variety of tiny chairs to fit inside small shops and spaces. However, on my own, I wouldn’t have experienced the amazing workshops, the other attendees, or had the chance to meet local writers. 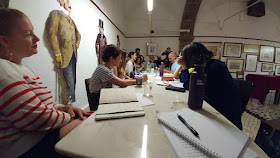 I took the non-fiction track with writer David Leavitt. We met in the basement of Livraria Ferin, the second oldest bookstore in Lisbon dating back to 1840. Our group always ran long as we shared, supported, and challenged each other. Each day we workshopped two of the attendee's pieces up to thirty pages in length. Our workshop covered accuracy, formatting, storytelling, language, voice, where a writer wanted their piece to go, and sometimes whether the writer wanted it to be non-fiction or fiction. Unlike fiction, non-fiction often includes discussing a writer's life to understand a piece and the direction if can take, so our workshop allowed for that natural discussion. After the workshop, participants often ate lunch together to talk. I haven’t attended many workshops, so I asked, “How does this compare?” Everyone said it was the best they’d ever attended, including some people with MFAs. 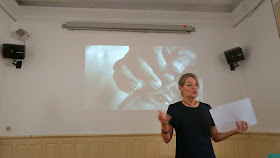 The primary workshops met Monday, Wednesday, and Friday mornings; on Tuesday and Thursday, we could take a secondary workshop. I selected Visual Storytelling taught by Pulitzer Prize-winning photojournalist Deanne Fitzmaurice. She taught us storytelling through photographs using layers, focus, light/shadow, the rule of thirds, color pallet, and feel, when to zoom in and when to step back. All aspects of writing but captured through a camera. She told us that as we worked our story would present itself. I find writing is the same way. You start in one direction and end up someplace different. 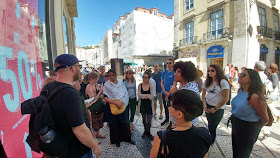 For me, the common themes that emerged were layering and shape. They appeared not only in my workshops, but on literary tours, in talks about Fernando Pessoa (the author of The Book of Disquiet), the history, and the structure of the Lisbon itself. Viewed from the waterfront, buildings rise like steps from the lower section that the locals call new because an earthquake, a tsunami, and fires destroyed it all in one day in 1755, and climb up to the older and higher sections of this small capital city.

Shape was another major theme. David Leavitt told us we don’t have to kill our darlings, as is often advised. Instead, he said to ask, “Does it ruin the shape of the piece?” I sat in on the Poetry Editing workshop with John Hennessy, the poetry editor of The Common Magazine, and he discussed the shape of a poem and how the white space can evoke a feeling, room to breathe, and yet another layer. This is true for prose as well. 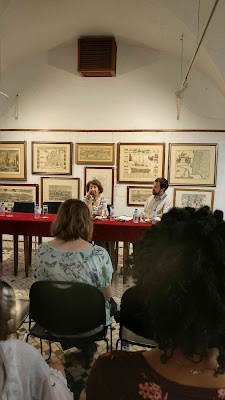 Adding layers and shape to the Disquiet experience were not only the writers leading the workshops and the fellow attendees but the Portuguese writers who held readings and discussions. As an American, it can be difficult to grasp the impact of a true dictatorship. Two years before I was born the forty-eight-year dictatorship ended. My lifespan is the difference between freedom and oppression. For places as old as Lisbon, a three-thousand-year-old city named by a God, forty-four years is a blink of an eye. It’s still fresh in their minds. Three of the female Portuguese writers helped me better understand this layer.

I met Teolinda Gersão as I stood outside the bookshop where she was presenting. “Welcome to the city that is always under construction,” she said to me. Her words rang through my head as she shared the history of Lisbon and told us about her book, The City of Ulysses, which I’m reading right now. She said today as people, “We want to find home,” and that “The world feels rootless.” I believe she’s right about that. I also agree with her that “History lies a lot,” because the victor writes it, but “myth doesn’t.”

Another woman I had the opportunity to see was Dulce Maria Cardoso. Her family moved to Angola when she was an infant and returned after the Angolan War of Independence in 1975. She went from a more modern country to one discovering itself and attempting to modernize. Americanize as she referred to it. She discussed what it was like as a young woman to move backward in time as she returned to a country she wasn’t familiar with and watched it attempt to catch up. Soon I’ll be reading her book, The Return. 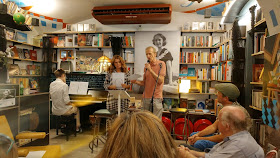 The third woman who I will carry in my heart forever was Sophia de Mello Breyer Andresen. Her name appeared on the door to my hostel room, on the tote bags given upon arrival, and on my travels around the city. She is to Lisbon what Edna St Vincent Millay is to Camden, ME. We attended a reading of her poems at the adorable bookstore Menina e Moça on the famed Pink Street. Since she passed away in 2004, her translator Richard Zenith and her daughter, who owns the bookstore, Cristina Ovídio performed bilingual readings of Sophia’s work set to music. Her grandson even read a poem he’d written. When they finished, they passed around slips of edible paper with the following poem:


After we read it a few times, we ate the paper to take the poem inside ourselves and make it a part of us. 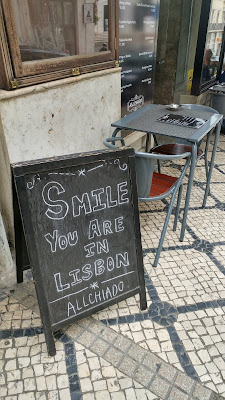 Anyone can Google a country, read a history book, or familiarize themselves with a location, but to experience the words and hearts of the people who live there is different. To learn about history so removed from my own and to see a country healing itself through creative endeavors helped me to understand it on a deeper level. To have had this opportunity through Disquiet added shape and layers for me as a human and as a writer in a way I could never have done on my own.

To learn more about the Disquiet International Literary Program, visit www.disquietinternational.org. There are a variety of scholarships, fellowships, and a contest. The contest includes fiction, non-fiction, and poetry which are processed through Submittable. 2019 was their tenth year of the program, and they had over fourteen hundred applicants to the contest. I wasn’t the contest winner, but she was in my workshop, and I learned a great deal from her. However, I was honored to receive a scholarship to attend.

Along with the contest and scholarships, there are Luso-American Fellowships for four North American writers of Luso descent. Disquiet has made an effort to increase the awareness around Luso-American voices and launched their first book Behind the Stars, More Stars, which is an anthology of Luso-American alumni of the Disquiet program. Disquiet has a residency following the two weeks in Lisbon. I had a chance to attend the residency in Sao Miguel in 2018, and it was a true pleasure. 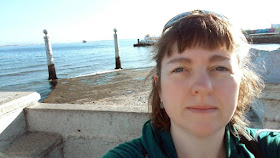 Christy O’Callaghan lives in Upstate, New York. She works with incarcerated adults seeking employment. Her favorite pastimes include hiking, gardening, swimming, and collecting sea glass—anything outside in the fresh air. You can learn more about her, her blog about being an over 40 newbie writer, and her work at www.christyflutterby.com.