Making the Most of Memories 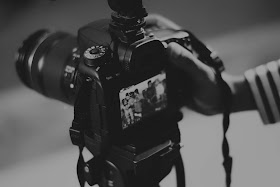 Last Christmas, my daughter presented me with a box full of movies. But these weren’t just any movies; they were home movies, from back in the day when people used video recorders instead of their cell phones to make memories last. She’d had them converted to digital because those memories weren’t lasting very well after all. The tapes were degrading at an alarming rate!

(And here is where I make my plea to you to gather up your old tapes of home movies and do the same. If you are a techno genius, you can do it yourself. But there are businesses that specialize in digitalizing your memories and honestly, it wasn’t too expensive and well worth every penny.)

So recently, when I had a bit of time, I pulled out one of my DVDs, expecting to see Christmas shenanigans because it was generally at Christmas when I’d say, “Oh! Get the video recorder!” and Mister Man would dutifully film the chaos. I did not expect to see my dad talking for nearly an hour about his life during the Great Depression but what a gift that was!

My daughter had a 5th grade school project, one where she was asked to interview a relative who had lived through the Great Depression. Both of my parents remembered the Depression but Dad, being a bit older, had more vivid memories. And so he talked about what Christmas was like during that time, where he lived, how his family celebrated. But he also talked about pets and best friends and school life.

What made the difference in this interview, I think, was that my daughter had very specific questions. So it wasn’t just Dad rambling about his life back in the day. He painted such a picture of his childhood, describing his home, what he ate for Sunday dinner, even the games he played.

I’m so thankful my daughter was given that assignment, and I’m glad that she made her father record it. (While she was recording, I was in the kitchen, talking on the phone, my attention elsewhere.) And I’m also very grateful for a quiet moment last week, just me and the movies, when I could savor every minute of those memories my dad shared.

Which brings me to my next plea: when your older-but-wiser loved ones gather soon, don’t just ask them to tell you about their life back in the good old days. Write up some specific questions like, “What kind of games did you play?” or “What was a typical school day for you?” or even “When was your first kiss?”

You can record the interview, but I’d also recommend writing down responses. And not just because I’m supposed to be talking about writing here. But because as wonderful as the digital world is, technology speeds along, and what’s new becomes old and sometimes lost. Words on a page, though...they can last forever.

Cathy C. Hall writes for children and adults. Look for her latest byline in Chicken Soup for the Soul's Miracles and More. And if you're in South Korea, you can find her recent leveled readers in bookstores and schools. But if you want to catch up with Cathy herself, look for her around SCBWI conferences or workshops or book signings where she's having fun, making new memories (Um...which she may or may not be able to share)!