Friday Speak Out!: Why Am I Writing This?!”

Why do we write? Really? Why? That might be one of the more compelling questions of the century, if you ask me. For every writer, the answer is different, but also possibly the same.

A little over a year ago, an individual walked right out of my life, and a gazillion other people’s lives, never to return. I was devastated. It was like he had died. Okay, so he did recently reappear for about an hour, ironically for a funeral he was obligated to attend, but now he’s gone for good. And I was heartbroken all over again.

I consider myself mostly a fantasy writer. However, I am driven to write a faith-based screenplay inspired by this. Naturally, the story is changed up, a lot, but not the emotion behind it. But why am I even writing it? Maybe because it’s cathartic in a way. Maybe I can take the sadness and pain and transform them into a beloved Oscar-winning screenplay (sorry, I diverted to fantasy writing here). Or maybe it’s to get ideas and stuff out of my head and on the page, where they belong. While my character’s story isn’t exactly my story, while what happens in my script won’t be exactly what happened to me, I can grab snippets from life to make the script “real”. And so this fantasy writer is venturing into this new territory.

Again I ask – Why do we write? Why do we do this to ourselves? I don’t have to write this piece. I could write a nice little fairy tale adaptation and be fine. But I wouldn’t be satisfied. I’ve had so many perfectly good ideas that I’ve ended up putting aside, because they weren’t doing anything for me at the time. But this idea just isn’t going away.

So, I think we write ultimately because we have a story to tell. I have a story to tell. Writing this might be stepping way outside of my comfort zone, but I’m still delving into these uncharted waters. Doubtless we’ve all been told by someone to “write what you know”. Amen to that. I still might write that fairy tale adaptation someday, but at the present moment, I’m sticking with what I know. 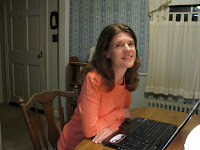