I'm Not Mrs. Jesse James--But I AM Envious

Pat Wahler's book, I am Mrs. Jesse James, is being released on August 28... and I'm a bit envious.


Oh, I'm extremely happy for Pat,  let's be clear about that. I'll be at one of her book signings to snap up a copy and I'll continue to sing her praises because of her writerly work ethic and her gift with words, but I've been working on a historical fiction project for almost two years. I've had an editor look at it, and now I'm doing some much-needed deconstruction and reconstruction...

... which made me curious. What did Pat learn along the way that might help me? Or you?

Fortunately, Pat was gracious enough to agree to answer my questions. Here is a bit of what motivated Pat Wahler and what she learned along the way as she wrote I am Mrs. Jesse James.

Why the wife of Jesse James? Why write a novel about her?

Jesse James is discussed almost as much today as he was during the time the Pinkertons chased him after the Civil War. There is an astonishing amount of information on him. I knew he had a wife but found little about her. This piqued my curiosity. What kind of woman was Zee Mimms James? The book came about when I asked myself that question. I felt she needed to be more than a footnote in Jesse's life.

Pat, that is a powerful lesson. You were curious as a writer and a researcher, which will inevitably lead to fueling the curiosity of readers. I'm curious about why historical fiction appeals to you, since you've written in different genres.

I've always had an interest in history, but often textbook-style material didn't appeal to me. I soon discovered that most historical novelists put every bit as much research into writing their book as historians put into theirs. Historical fiction brings the people and places of the past to life in an engaging way.

Yes, research can take us into exciting directions, but it isn't easy. What obstacles did you encounter as you dug into Zee's life?

Research was a challenge. As I mentioned earlier, there wasn't much primary material on Zee. However, as a novelist, this provided opportunity. I read everything I could find on her, Jesse, the James family, significant events in their lives, and the turbulent times in which they lived. From that, I got a feel for how she might think and react, which helped me shape her character.

I love the idea of you stepping into Zee James' shoes and getting a feel for what her life was like. I've been struggling with organizing my manuscript. How did you plan or map out your novel?

Biographical historical fiction provides a built-in basic outline. Census data gives factual information like birth dates, marriages and children. You generally know the places your characters went and why they went there. History tells what events happened around the characters that impacted their everyday lives. The novelist has the fun of filling in the other details.

Pat, I'm glad to know that after all the revising and critique was done, you still considered it a fun endeavor. I imagine your journey was paved with some great advice or suggestions. Would you mind sharing a tidbit or two?

Don't wait to start the story! I had to do an entire rewrite on the first three chapters because my editor said beginning with Zee's childhood wasn't necessary. She was right. Too often, backstory gets in the way of connecting the reader with the character. If they don't care about the character, they'll close the book.

You've written a lot of creative nonfiction (short memoir pieces), which take short bursts of persistence. However, writing a novel isn't a sprint, it's a marathon. Pat--what was your typical writing day like?

I'm freshest in the morning, but I can also say there were many times when I sat at my desk most of the day. Especially when deadlines loomed.

Is there any part of the day when I'm fresh? ;) I'll have to think on that. As I've been digging into the story I'm working on, I've encountered some surprises. What most surprised you about Jesse James' wife?

Her love and loyalty, and her willingness to provide a helping hand to others endeared her to me. I think Zee tried to do her best, despite the very difficult circumstances in which she lived.

Pat, so many writers set a project aside, and it ends up gathering dust. I'm sure most writers have at least one cobweb-covered manuscript. You persevered.  Was there ever a point where you almost put the manuscript aside--for good? If so, what made you pick it up again?

I toyed with the idea of writing about Zee more than ten years ago, and that's when I started the research process. During NaNoWriMo in 2009, I did more research and wrote in earnest. Then I discovered a romance writer had just published a novel about Zee. I figured there wasn't any point in continuing and put my book aside for a few years. But the muse nagged. I looked at the multitude of books on any single prominent historical figure and realized I could still tell my own story about Zee. I didn't read the other author's novel until I'd completed mine, and discovered we'd taken very different approaches. Never give up!

Pat, I'm so glad you didn't give up, and I'm looking forward to reading I am Mrs. Jesse James. (Pat's novel comes out on August 28.) You can pre-order it here.

Do you feel lucky? You could be the winner of a free copy. I've preordered two copies of I am Mrs. Jesse James. Leave a comment here, and in early September, when they're delivered, I'll do it old school and draw a name from a bowl/basket/hat full of names.

Update: Joan Leotta won Pat's book. Joan, if you email me at sroslawski(a)yahoo.com and give me your mailing address, I will send you the book. 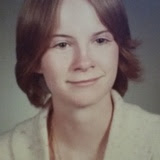 Sioux Roslawski has wanted to be a writer since she was 13. She's written lots of creative nonfiction but someday, she hopes to have her manuscript published. If you're wondering why Sioux always has bangs, check out that billboard-sized forehead, and if you're interested in reading more of her stuff, check out her blog.
Sioux Roslawski at 2:39 AM
Share