by B. J. Thompson

All the months, sometimes years, of research and editing, the same being said for characters endlessly haunting, for pivotal scenes e'er repeating in one's mind...all that seasoning is a solo endeavour. It has to be. However disquieting, traumatizing, thought-provoking the work is, the scribe prays for even a modicum of that human experience to wash over the devourer of her tale, and that a silent tremor be felt in the reader’s heart, if only for a while.

And then on to the next...from the figurative rape of Nanking to the romance of the century.

Writers must wash their dirty laundry in public. The blood, sweat and tear stains from the former work have to be mentally white washed in order to dish dirt anew. It's an onerous and exhausting task but must be done in order to write forward, as write forward we writers must.

Yes, satisfaction is felt from those who enjoyed the work. Writers get to smile and experience that all-knowing, unspoken communiqué, writer-to-reader, and for a moment, souls touch—what I believe may be the true quest of an artist. Alas, the join will break, and the wordsmith must return alone to her cerebral lair. There is another path to walk, new characters to meet, new obstacles to overcome and new lessons to be learned.

No wonder I pray for Cocktail Hour... 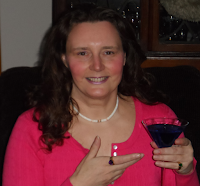 B. J. Thompson is a retired public relations liaison and currently a Calgary, Canada-based author of three literary/historical novels all available now on Amazon; No More Blood - Epilogue to the life of Truman Capote & In Cold Blood, Eighteen Minutes to the Beast - a Nixon Watergate Thriller, and Sessions - Predator vs. Shrink Who will survive? B. J. has done extensive travelling and now lives to swim, hike and fish in the Rocky Mountains, enjoy friends and family, lead an avant garde writers group likened on the 1920s Montparnasse style, and pen her dark tales on either side of Cocktail Hour. B. J.'s upcoming historical epic, entitled AIR, tells of six US Navy sailors in 1941 as they try to hold on to life after the USS Oklahoma capsizes in Pearl Harbor. All six, trapped below the sea, find out there can be far worse things in life than death. AIR is due to be released in late 2019.
~~~~~~~~~~~~~~~~~~~~~~~~~~~~~~~~~~~~~~~~~~~~
Would you like to participate in Friday "Speak Out!"? Email your short posts (under 500 words) about women and writing to: marcia[at]wow-womenonwriting[dot]com for consideration. We look forward to hearing from you!
~~~~~~~~~~~~~~~~~~~~~~~~~~~~~~~~~~~~~~~~~~~~
Marcia Peterson at 1:00 AM
Share