Friday Speak Out!: The Road to Publication

You are picked up by a taxi at Idea Central. Mr. Protagonist is at the wheel and seems to be preoccupied with something. Turning left onto Problem Blvd., he stops to pick up Mr. Sidekick who hops in the front passenger seat. Mr. Sidekick is very funny and tells you a story on how they got to be friends. The two of them are discussing Mr. Protagonist’s problem when a motorcycle swerves in front of the cab.

“It’s Miss Antagonist! She’s out to get us,” Mr. Protagonist shouts, and takes an alley to avoid her. However, when he turns back on Second Crisis Street, Mrs. Secondary Character flags him down, hurt and bleeding. It is the work of Miss Antagonist, she gasps in pain. Mr. Sidekick jumps out to take her to the hospital. Mr. Protagonist guns it down the street to go after the dastardly woman.

He makes a right turn on two wheels onto Holy Toledo Way. By now, you are starting to wonder if you are ever going to get to where you want to go, when, Miss Antagonist roars up beside the taxi on her bike. They swerve back and forth, forth and back, and your stomach is doing flip-flops. How will this end up? Will you ever get there? Can you refuse to tip?

Suddenly, in front of the speeding vehicles, a young mother is pushing a baby stroller at the intersection of Holy Toledo Way and Culmination Drive. Mr. Protagonist yells, “Hang on!” and turns the wheel sharply toward Miss A. and away from the pedestrian. The villainess tries to avoid the cab, loses control, and skids sideways. With a sickening crunch, she crashes into a lamppost right in front of the police station.

After a while, when the coroner’s wagon has pulled away and the statements have been given to the police, you climb back in Mr. P’s cab, and he whisks you down to One Book Signing Lane to the Last Chance Bookstore. You pay him (with a large tip), shake his hand and thank him for the adventure. As he pulls away, he says, “Who knows, maybe we will meet again.”

The bookstore owner is waiting for you at the door. “Welcome, Ms. Author,” she says, pumping your hand. “We are so honored to have you here today. Your story was so exciting!”

And that is how you get from idea to novel. 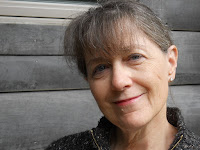 Robin Mullet writes poetry, short fiction and non-fiction. Her work has appeared in anthologies such as, Common Threads, in A Rustling and Waking Within, and others. She was a finalist in the New River Press 2013 American Fiction Prize for her short story, "Blind Horse." Her non-fiction articles have been published in Wild Bird Magazine and Hobby Farms. She writes the column, “Muse Clues” for the Ohio Poetry Association quarterly newsletter. She calls Eastern Ohio home, where she gardens and her husband is a busy beekeeper. Her website is www.robinmullet.com.
~~~~~~~~~~~~~~~~~~~~~~~~~~~~~~~~~~~~~~~~~~~~
Would you like to participate in Friday "Speak Out!"? Email your short posts (under 500 words) about women and writing to: marcia[at]wow-womenonwriting[dot]com for consideration. We look forward to hearing from you!
~~~~~~~~~~~~~~~~~~~~~~~~~~~~~~~~~~~~~~~~~~~~
Marcia Peterson at 2:00 AM
Share