My name is Sioux and I'm an eyebrowaholic.

I've discovered--recently--that I'm stuck in a rut when it comes to how I show. Of course, that's a mantra that all writers mutter: Show don't tell. I try my best. I do. I attempt to paint a picture through gestures and facial expressions, to convey to the reader what emotions my characters are feeling.

However, when digitally conversing with the writers in my accountability group, I realized that I often fall back on eyebrows. I discovered that I frequently rely on eyebrows--and only eyebrows--to express emotions.


He turned towards her, his eyebrows raised in anticipation.

Her eyebrows lowered, and pushed down on her eyelids. Really?

One of Mama's eyebrows arched. I was scared of what she was gonna do next.

I did a search in my current WIP and found 9 eyebrow bits. At one point I jotted them down on a piece of scrap paper, intending to include them in this post but then I misplaced the paper, so I'm hoping the above bits of "showing" are not as lame as what I really wrote. Otherwise, the only thing I'm showing is what a horrid writer I am.

Then Sue Bradford Edwards saved the day. She suggested a book. I immediately ordered it, and it was delivered this week. 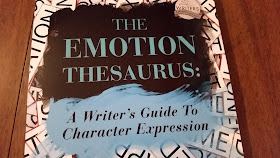 This book is amazing. It lists around 80 emotions, and includes a wide variety of physical signals. For example, if a character is surprised, you don't have to fall back on both eyebrows raising up. You can have your character's mouth fall open. Their hand can fly to their chest. They can gasp.

This weekend I'm leading a writing retreat. I'm going to work on a query letter and a synopsis, which is more than enough to keep me busy. However, when I need to take a brief break from those two tasks (since I'm terrified of the s-word... Synopsis is a dirty word), I'm going to look for ways to show what my characters are going through... without eyebrows.

When it comes to writing, what is one of your favorite reference books? Sioux wants to know.  (And whisper it. My husband thinks I have too many books already.) 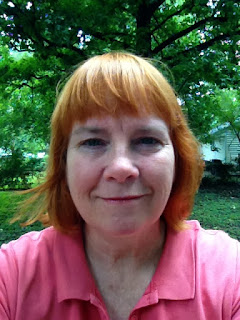 Sioux is working on polishing up a middle-grades historical novel; her progress is being nudged along in a major way by her writing accountability group. In her spare time (spare time? What is that?), she spends time with her family, and she rescues golden retrievers for Love a Golden Rescue. If you'd like to read more of her writing, you can check out her blog.
Sioux Roslawski at 2:13 AM
Share