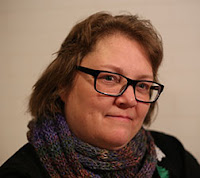 Cheryl Fines teaches English at a secondary school on the Canadian prairies. She loves exploring the many genres of literature—both through reading and writing—with her students. Few things are more satisfying for her than seeing that spark of passion for literature ignite, or witnessing a student find her voice through writing. When she’s not teaching, Cheryl channels her energy into her writing. Most often, she writes fiction, in a wide range of formats, but she also dabbles in nonfiction. Cheryl is especially drawn to human rights and social justice issues; this particular piece of writing emerged organically, in response to the outpouring of #metoo personal stories, and the subsequent torrent of reactions.

Cheryl lives in a small Manitoba city with her partner and their two children. She values spending time with her family and friends. Cheryl’s other pursuits include fibre arts—spinning, knitting, felting, dyeing—all things wool! Oh, and coffee. Lots of coffee.

WOW: Congratulations on your top ten win in our 2017 essay competition! What prompted you to enter the contest?

Cheryl: Thank you. It was a matter of timing, really. Right when I was mentally sorting out the #MeToo movement – how it affected me, how it would affect my daughters, how people were reacting – I saw the reminder that the essay competition was drawing to a close. I knew I would not be writing in a formal essay format; however, I thought that your rules were flexible enough to permit my unorthodox form. And that was that! I knew that writing about #MeToo would be a useful exercise for me; the contest entry was a little added bonus.

WOW: Your essay, “#MeToo” covered a hot topic, and you really did justice to the subject. I related to your descriptions of the issues, and the feelings that surround the dredging up of these tucked away memories. Did the piece come together quickly or was it a challenge?

Cheryl: As far as words on paper, it came together quickly. However, I’d been mulling it over a great deal, before I sat down to write. It has an intentional air of urgency and is a little helter-skelter, because I didn’t want to lose that tone of aggravation, anger, regret … of calling everyone out on their/our role in this mess. It was meant to sound ranty and challenging and messy. It was meant to leave the reader uncomfortable in his/her own knowledge and experiences.

What I think is important to say here is that these experiences of mine (the tip of the iceberg, and certainly not covering the most egregious offenses) are not worth talking about by virtue of their being horrible, isolated occurrences. Instead, they are laid out for all to see because they’re so very common. Sexual abuse and assault are such a routine part of our lives as girls and women – but the relative silence about it have made us all complicit in its cover-up. Whether or not it’s making things unpleasant for some, #MeToo is long overdue, and I believe that, as a society, we could not move toward gender equality without this longstanding disgrace being exposed and called out, leaving a clear path on which to move forward.

#MeToo has left me pondering the discomfort that had to have happened for every major social change movement. Forcing people to consider and reconsider their beliefs, practices, and desires is a necessary component of any social movement. I’ve heard from so many women – typically older women – that it’s unfair for the few to be dragged through the muck when it was just the way it was. I understand that idea, but of course, I do not agree. In any situation where a group of people could do something wrong because of their privilege (be it male, white, WASP, etc), it has come down to the individual’s moral integrity. Wrongdoing simply because you can, or because it’s always been this way, is a wielding of power that is not excusable.

We’ve seen men in all sorts of power positions get called out recently – men in the entertainment industry, politics, religious figures, doctors - men with power, who chose to use it in a way they knew was wrong. Period. End of story. Just because the casting couch was a longstanding tradition in show biz does not make it acceptable. Nor does it make it inevitable. Choices were made. No doubt they were not anticipating being called out, but it’s a risk anyone takes when they choose to keep wrongdoings under wraps. I think it is worth noting that there were no shortage of men with access to the same privilege, who opted not to abuse it, but to act in an honorable way.

As #MeToo proceeded, it galled me to hear the voices of men rise up with the message, “I had no idea.” When virtually everyone (victims included) is mixed up in the same giant scheme, naturally, there is a certain embarrassment in exposure. But to claim ignorance is so much worse than simply recognizing the truth and building from there. It is, indeed, to continue to (try to) use one’s position of power for personal benefit.

I am struck by the vastness of conspiracy. For decades, probably centuries, women’s silence enabled those men to carry on with impunity. This silence was deeply embedded in us – personally, I think it’s all tied in with the (overwhelmingly female) concepts of politeness, compliance, modesty, and the like – carefully moulded characteristics of a “good girl” or “good wife” etc – all of which feeds directly in to the problem again. We’re all accountable. My little writing piece provided me with an outlet to express some of my thoughts on the matter, but also, allowed me to stand up and be counted.

WOW: Again, you've eloquently spoken about the movement and the surrounding issues. Thank you! With a teaching job and parenting responsibilities, how do you make time to write? What works for you?

Cheryl: Million dollar question! I don’t write nearly as much as I should (or want to). I have joined a supportive group of writers at my local library, and enjoy reading their work and offering feedback, just as much as I appreciate theirs in return. That keeps my toe in the water.

Beyond that, my writing is hit and miss. Sometimes I get on a roll, and carve out time to write regularly, and unfortunately, often, it takes a back seat to more pressing needs. It’s a juggling act, but I’m usually dropping the ball. If you have strategies, I’d love to hear them!

WOW: Well, I'm gathering strategies too! Past winner interviewees have shared some of their ways, and readers can please comment below. Besides writing, you mention fibre arts as an interest. Can you tell us about that? What sorts of projects are you working on?

Cheryl: Oh, sure. I am a self-proclaimed woolaholic. I have always knit and crocheted, but over time, added on dyeing (roving and wool yarn), needlefelting, wet felting, fulling, and now also spinning. I’m about to try my hand at weaving. I plan to process a fleece this summer – the only thing I don’t really anticipate doing is shearing - I’ll leave that to someone else! As for what projects I’m working on – a few shawls lately, sometimes socks or mitts – I’m more fond of smaller projects than big ones. I like the sense of accomplishment. (Hey – maybe that’s why I also like flash fiction!)

WOW: Thanks so much for chatting with us today, Cheryl! Before you go, do you have any tips for our readers who may be thinking about entering writing contests?

Cheryl: I’ve entered the WOW Flash Fiction contest many times. I love the challenge in telling a complete story in such a restricted number of words. And now, I’ve also entered the nonfiction contest once. I would urge anyone who enjoys writing to enter your contests – they’re inexpensive to enter, and what a great community of writers! Plus, if you struggle (as I do) with making time to write, there’s nothing like a looming deadline!

For more information about our quarterly Flash Fiction and Creative Nonfiction Essay contests, visit our contest page here.
Marcia Peterson at 1:00 AM
Share