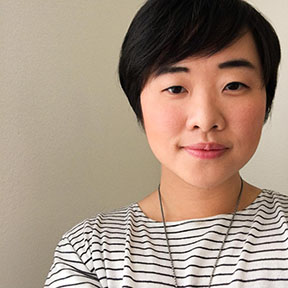 Originally from the sleepy suburb of Downers Grove, Illinois, Michelle spent her childhood writing stories to keep herself entertained. After graduating from Northwestern University in 2016 with a double major in Environmental Science and Film, she packed her belongings into a small car and made the time-honored trek to LA to pursue a career in entertainment; she is currently working at NBC.

As a queer POC female writer, Michelle likes to think that she’s the true triple threat Hollywood is scared of. Michelle is particularly interested in writing strong, female characters in the genres of drama, grounded sci-fi, and magical realism. As a child, her role model was Mulan—today, Michelle writes female-oriented stories in the hopes that she will create empowering characters for younger generations to look up to.

Read Michelle's haunting story, Venus, From the Sea, and then check out our comprehensive interview with the author.

WOW: Congratulations on your 2nd place win, Michelle! I loved your story and wanted to read more when I was finished. Is "Venus from the Sea" part of a larger body of work you are writing? We'd love to hear more about that.

Michelle: Yes, it is! It started as a feature script. At the time, I was working with a program that takes writers and their scripts out for pitches with different management companies for representation. I completed the first draft in two and a half months--I was writing on a deadline, doing 15+ pages per week so I could have material to show managers.

By the end of that month-long process I was completely drained and beginning to hate the script. I forced myself to put it away for three weeks. When I revisited it with fresh eyes, I fell in love with the characters all over again. The second draft was easier, but it still felt like something was missing. Screenwriting is such a different process than prose because characters' internal struggles have to be manifested visually on screen. It doesn't leave much room to explore the characters in a more personal and in depth way.

I took the first ten pages of my script and wrote it into a 1k prose piece in about a week--with some editing, this was the piece I ended up submitting to WOW! I enjoyed the process so much that I'm currently in the middle of drafting a novel for "Venus from the Sea." I hope that in a little under a year, I'll have something close to a first draft done!

WOW: I love how projects like yours can take a turn for the unexpected. Best of luck with thre rest of your draft! On your website, you have a few specs you've written for TV shows. Can you explain to our readers what a spec is and things to consider when writing one?

When you spec an existing show, you're basically writing an episode that you think can happen. For example, in "Supernatural" there are quite a few "time jumps" where several weeks have passed between episodes. You could write a spec episode based off what you think happened during those missing weeks between episodes. In the case of non-serialized shows or anthologies like "Law and Order" or "Black Mirror," you could write a standalone episode that doesn't have to fit into a chronology.

Spec scripts are mainly used to demonstrate that you can write different character voices, and that you have a good understanding of pacing and plot. There are only 45-60 minutes (25 min, for comedy) in an episode, so writing a great spec really shows that you know how TV show writing works. The biggest thing to consider when writing a spec is whether or not you've got your character voices nailed down. Once you have that, it's easy to come up with the rest.

WOW: You are living the dream so many young writers wish they had the courage to do. Was it hard moving from the midwest to Los Angeles to pursue a career in entertainment?

Michelle: It was definitely tough. I moved out to LA two weeks after college--my friend and I took a four day road trip across the country with all of our possessions crammed into her sedan. I arrived in LA with no paying job, and only a handful of friends. My immigrant parents don't work in the entertainment industry, so career-wise, I was on my own.

I gave myself the ultimatum that if I didn't find a paying job in 'the biz' within the year, I would move back to Illinois and change career paths. I double majored in Environmental Science in college, so I would have gone into something related to that, probably working in water pollution control.

Because of the ultimatum I gave myself, I seized every moment and opportunity I had. I tutored high school kids in SAT while job hunting. I went on coffee meetings with people in the industry I admired. At the same time, I did an unpaid internship at a film production company, and made sure my performance was good enough that two months into it, they "promoted" me to assist the CFO, and were paying me. In October, four months after moving to LA, my friend gave me a referral, and I used that referral and my experience at the internship as a launching point to get into NBC.

I feel incredibly lucky that it all worked out the way it did. I recently passed my one year anniversary of being in LA. I can't believe how much I've grown, and how many talented and awesome friends I've made in the year that I've been here.

WOW: Such an inspirational story! We wish you all the continued success in your career. As a member of the LGBTQIA+ community, how do you hope to make an impact in the diversity of entertainment and the media with your work as a writer?

Michelle: Media is incredibly powerful and completely shapes the way we interact with the world. Growing up, I didn't have many strong Asian female role models to look up to in films. I didn't have any queer POC role models. My "coming out" was a slow process that is, honestly, still a process. Not everybody in my life knows how I identify.

I hope that my writing will be able to give more queer POC opportunities in media, until it stops being a "novel concept." Asian representation in western media is still very limited as well--it's frustrating to hear people use "diversity" as a buzzword, but not actually champion diversity in the content they create.

I consciously work on creating accurate portrayals of queer POC characters in my own stories, and hope that some day in the future I'll be able to bring them to life on screen. The dream is to normalize queer POC in media and society--we're making progress, slowly but surely.

WOW: What are some of your favorite TV shows right now and why?

Michelle: There is so much content now that I have a hard time keeping up with it all, even though I work in entertainment and it's my job to!

I tend to write dramatic sci fi and magical realism, so in my free time I'm drawn towards grounded comedy to give myself a break.

So, to give a quick list, I'm currently watching "Orange is the New Black," "The Office," "Bojack Horseman," "Fresh Off the Boat," and "Hell's Kitchen" (it's a guilty pleasure...). There are tons of shows I haven't watched yet that are on my list, including "Sense8," "Game of Thrones," and "Stranger Things" (I know, I'm very behind on the times...). Like everyone, I'm drawn to shows that have relatable and compelling characters. Shows that are a little funny, a little serious, and a little heartbreaking are always my favorite ones!

Thank you so much to all of the wonderful people who work at WOW! This experience has been absolutely lovely, and I feel very lucky and honored that I placed second! And congratulations to all of the other winners and honorable mentions as well!