Things I Learned From Sherman Alexie and His New Memoir 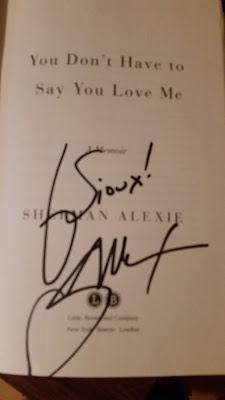 Sherman Alexie has a new book out. His memoir You Don't Have to Say You Love Me has him dealing with the death of his mother... along with all their struggles when she was still alive.

He's written poetry, novels and short stories. He's the author of a picture book. Alexie's won a bunch of awards. He's famous for his storytelling. So when he came to St. Louis a couple of weeks ago, it was a big deal.

What did I get from his talk (and from his memoir so far)? I've learned a lot, but here are a few tidbits I can share right now:
Alexie spoke of the importance of emotional honesty. He went on to say, "If you as an artist are unwilling to be this vulnerable... Why are you doing it?" (Why are you writing?)

Earlier this summer Alexie cancelled most of his speaking engagements. He wrote a raw, moving letter to his fans. In his letter, he was vulnerable and honest.

I don't think I've ever read a well-crafted memoir that covers dark territory that doesn't have moments of levity interspersed in the story. Mary Karr. Rick Bragg. Augusten Burroughs. All master memoir writers, and with occasional lighter moments, they all keep their readers from slitting their wrists.

When he spoke in St. Louis, Sherman Alexie had a full house in the palm of his hands. At one point he admitted, "I get hate mail from vegans. That's not scary." (He also told us about an encounter he had with a Prius-driving road-rager that was funny.)

In his memoir (beginning on page 67) he wrote a story about a time he evacuated his bowels... in a monumental way. It happened at the funeral home where his mother was lying in her casket... and it's hilarious.

Even though the memoir is full of sorrow, remorse, regret and loss, it also has spots where the reader laughs or at least smiles. It's rolling hills, rather than a roller coaster ride or a drive straight off a cliff.

Alexie is gifted when it comes to prose as well as poetry. There are chunks of stories alternating with poetry chunks.

Certainly that must have worked for him. Taking a break from writing in paragraphs to figure out line breaks and use of white space... well, that can be energizing for an author. Readers appreciate that as well. Changing up the rhythm in a piece makes it more interesting to read. We read poetry differently than we do prose.

If you want to see a bit more of Alexie, here is a video where he shares what libraries did for him, and this is an interview (when he was a bit younger) where he answered 10 questions.

How about it? What have you read that resulted in you embracing the author's vulnerability? Have you read something recently that has a great mixture of funny and sad? Or, do you have a favorite book that is multi-genre? 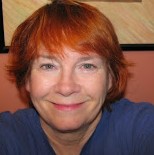 Sioux is a teacher, a writer, a mother, a grandmother and a dog rescuer. She reads voraciously, writes sporadically and dreams of someday having a book of hers on a bookstore shelf. If you'd like to read more of her meanderings, check out her blog.