I Heard Andrew McCarthy Speak At My Local Library

True story. (Doesn't my blog title sound like one of those titles from a "true story" magazine?) I live in St. Louis, and last night--actor, director, travel writer!, and now YA novelist Andrew McCarthy gave an inspiring talk about being creative. Once I got over the fact that I was in the same room with this man I loved on the silver screen since 1986 as Blaine in Pretty in Pink, who starred in my favorite comedy Weekend at Bernie's and my favorite guilty pleasure, St. Elmo's Fire, I listened to what the man had to say, and I was pleasantly surprised.

As writers, we know that we sometimes look at celebrity writers with disdain. It's true because we know what it takes to slave over a manuscript and try to get an agent and then hope for some kind of book sales if we are lucky enough to get published. Then there's this celebrity, who already has all the connections, and probably on some whim decided to write a book, and now is living our dream. Writers can be a spiteful bunch. (winks)

But guys, Andrew McCarthy is the real thing. He started with travel journals (as in notebooks he wrote in with a pen). Personal travel journals. And he liked writing about travel, so he thought: I will talk to this editor I know and see if he would be interested in my travel pieces. And Andy (as he calls himself in his talk) made it sound like the editor thought the same thing we all think: Oh here's another celebrity that wants to write.

But Andrew didn't quit and eventually this editor gave him a break; and then Andrew wrote some more travel pieces and won awards for travel writing (ie., Travel Journalist of the Year by The Society of American Travel Writers). Here are some of the well-known magazines he has written for: Atlantic Monthly, Bon Appetit, Coastal Living, and National Geographic. He also has credits in The New York Times, The Wall Street Journal, and Huffington Post. He wrote a memoir on some of these travels; and during all this, he also started on a novel.

Andrew said he worked on this manuscript off and on (because he has a day job--you know, acting and directing) for about eight years, and he couldn't get the novel right. He had this theme of secrets and how they can tear a family apart. So he was writing an adult novel, where the main character was a father/husband who had a one-night affair, several years ago; but this mistake resulted in a child, who was now an 8-year-old boy and lived across town. Andrew couldn't get the novel right. 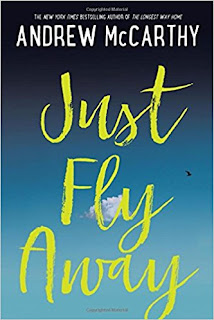 This is when I knew I had wrongly judged Andrew McCarthy, and I was about to be inspired as a writer. This evening became not just about seeing a famous person and listening to him talk (#swoon as I said in my Facebook post), but it became about listening to an author speak about his writing process and how he finally wrote the book we were holding in our hands, Just Fly Away. He decided to write it from the point of view of the teenage daughter, and he finally got it right. (After all, who knows teenage girls better than an 80's heartthrob...)

Besides this story of his struggle over the voice and point of view of the novel, he also said these three important and inspiring things (and I'm paraphrasing, FYI):

If you have a chance to see an author (whether a famous celebrity or not) at your local library, GO. This is the second one I have seen in a year (Jay Asher Thirteen Reasons Why was the other), and both times, I walked away feeling the desire to write. And for those of you who know what my last two years have been like ( divorce, going from a stay-at-home freelance mom to a full-time editorial assistant mom, beating myself up about my lack of fiction writing), then you know that this is a big thing!

Margo L. Dill is a writer, editor, teacher, and mom living in St. Louis, MO. For more information about her books, please check out her website, where she also blogs about being a single mom and writer. You can also check out her novel writing course here in the WOW! classroom.