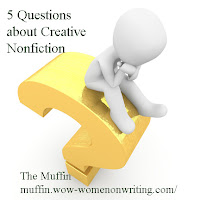 Because I teach writing nonfiction for young readers, I end up answering a lot of questions about nonfiction writing. Here are the five I get most often.

What is creative nonfiction?

This term was first used by Lee Gutkind to describe narrative nonfiction. Creative nonfiction frequently uses elements associated with fiction writing. The writer builds scenes to help bring the story to life for the reader.


Did you say story?

You better believe it. Many pieces of creative nonfiction are written with a focus on story. For example, if I was going to write about Teddy Roosevelt, I could write about the story of his dinner with Booker T. Washington. Or I might focus on the story of his life as a Rough Rider. Whichever story I chose to tell, I would select only those facts that supported this story.

No. Everything I would include in my nonfiction story would be true. But I would only include the information that fits my slant, the story that I’m telling. I wouldn’t write about Roosevelt’s daughter Alice although she would make a colorful character in her own right. It isn’t dishonest to leave her out. She didn’t play a part in either story. This is just a matter of focus. Especially when you write for young readers, you face a very limited word count. Reserve those words for information that is a good fit.


Okay, you’re not hiding the truth. But you called it CREATIVE nonfiction. What do you get to make up?


But what about the dialogue? I can make that up, can’t I? Or just say that it is what she was thinking?

No, no, no! Even dialogue has to be sourced. Listen to interviews or watch documentaries. Read or listen to speeches that the person gave. Look for published letters or diaries or even unpublished letters and diaries. In my mind, newspaper stories are second tier sources just because they aren’t as reliable. Too often reporters rush to get the story in first. But the point is that even dialogue needs to be researched.


Creative nonfiction is a fun and fascinating style of contemporary nonfiction. It isn’t anything like the nonfiction we had when I was in school. It is fast-paced. It pulls the reader in with a sense of voice and creative word play. But like all nonfiction before it, it is true and it is factual. After all, creative though it may be, it is still nonfiction.