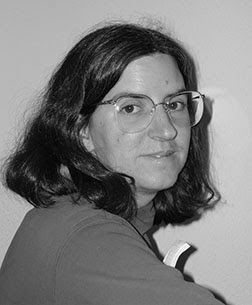 Today we welcome Laura Ruth Loomis, whose story, Notes to Self, One Week Out takes readers deep into the psyche of a sexual assault victim. Read her thought-provoking entry here, and then come back to learn more about this talented writer.

Laura Ruth Loomis is a social worker. She lives in Northern California with her wife and a ridiculous number of pets.

Laura’s fiction has appeared in On the Premises, Phone Fiction, Many Mountains Moving, Wordrunner Chapbooks, and elsewhere. Her flash piece, “Notes to Self: One Week Out,” grew out of a haunting news story from a few years ago.

When the real world gets too grim, Laura writes humor, including one piece that appeared in Writer’s Digest. So far, the highlight of her writing career was getting both a runner-up and a dishonorable mention in the Bulwer-Lytton “It was a dark and stormy night” Awards: http://www.bulwer-lytton.com/2015win.html

Laura is currently working on a series of interlocking short stories that fit together into a novel. Here is a sample: http://onthepremises.com/wp-content/uploads/2015/09/On-The-Premises-Issue-10.pdf.

WOW: You mentioned "Notes to Self: One Week Out" came from a story splashed across the headlines a few years ago. Do you often find inspiration for your fiction from stories inspired by real life?

Laura: I sometimes get ideas from real life, though it's not usually a front-page news story like this one. More often I'll run across an odd item, like someone getting a letter from her bank erroneously telling her that she's deceased. One of my first published stories came about because of a news item where someone had stolen a mail truck. I decided it would be interesting if the thief was an impulsive lover, trying to retrieve the breakup letter he'd just sent to his girlfriend. (Nowadays, of course, they'd just do the breakup by text.)

WOW: I love that--clever premise for a story, although you're right about letters in the mail becoming obsolete! What do you want readers to ultimately take away from "Notes to Self" once they've finished reading it?

Laura: In the media coverage of the rape trial, and others since then, I was struck by how the victim disappeared from the story. Obviously the anonymity is necessary to protect her from harassment or worse, but the result was that the coverage humanized the attackers more than it did the victim. It's also tempting to avoid thinking about what it's like for her, because none of us want to imagine being in her position.

I can't speak for the real person, obviously. But fiction is about empathy, seeing through another person's eyes. I wanted to make visible a woman who's been through this trauma and humiliation, and how she reaches for the courage to find her way back from that. The worst experience of her life is not the end of her story.

WOW: That is so true about the victim often "disappearing" from the news story.  Besides this flash fiction piece, you've been published in a lot of different places.What is your favorite genre to write and why?

Laura: You wouldn't know it from reading "Notes to Self," but I love writing humor. I'm a social worker, so I see a lot of depressing things - and occasionally some wonderful ones. Laughter keeps me going.

As I mentioned in my bio, my current obsession is writing a series of short stories that fit together, different characters having very different views on the same events. It's a bit like doing a logic puzzle, and it's very satisfying when the stories can stand alone, yet also intersect with the others.

WOW: That's a neat concept--and it sounds very difficult! Can you tell us about the humorous piece that appeared in Writer's Digest?

Laura: They used to have a feature called "Reject a Hit." I wrote a rejection letter for Thomas Hardy's "Tess of the D'Urbervilles," telling him it was too grim and depressing. The editor made me take out the anachronisms, such as suggesting that Hardy watch "Old Yeller " to cheer himself up.

WOW: I remember that feature--I always looked forward to it! I'll have to dig back through my back issues so I can read it again. Do you have a routine when it comes to submissions? Do you submit more fiction than non-fiction, or do you feel you write/submit both types evenly?

Laura: I write some essays and creative nonfiction, but I my real love is fiction. The stories I write - including science fiction and fantasy--are more believable and make far more sense than most of the real--life events I see in my line of work.

WOW: Thank you for visiting us today and sharing insight on your writing life. We wish you all the luck in the future!