Voice: Make Your Writing Your Own 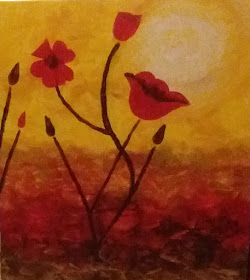 When my friend Kathryn turned 60, she had a painting party. We gathered together bedecked in aprons and with our hair pulled back. Then an artist took us step by step through a specific painting.

We started out the bottom of our canvases, painting a dark brown layer of soil topped be red and then ochre. Next we painted the sky a bright yellow with a near white sun in one corner. Finally we worked in the poppy stems, buds and bright red flowers.

I expected us to end up with a group of paintings that all looked a lot alike. Sure, I knew there would be variation based on artistic talent but other than that I expected the similarities to be greater than the differences. But that wasn’t the case.

My colors nearly duplicated those in the example but my brush strokes were like stucco, broad and obvious. Cathi’s colors were much darker with brush works so fine that they were invisible. She finished the painting by using the tip of the handle to scrape away thin lines of paint leaving behind striking white lines. Person by person, we each created a painting that was in some way uniquely our own.

And that’s what we need to do when we write. Give every woman who blogs here the same topic and you are going to get a wide variety of blog posts. In part, this variety would come about because of the types of writing that we do. Some of us write primarily nonfiction. Others write fiction. Some write for adults, others for young readers. This matters because the audience that we most often write for shapes how we think about writing.

But there will be other differences as well. We represent a variety of age groups. We grew up in different parts of the country. That means that while one of us might use the term tadpole while another would use pollywog. We clean the carpets in our homes with vacuums and sweepers.

Educational level, interests, hobbies and more vary from one Muffin blogger to another. All of these things go into developing our own unique writing voices. My son says that I sound like a well-educated pirate. When I asked for specifics, I got “smart but cheeky.” What can I say? After 17 years, he knows his mother’s voice.

When you write, make an effort to write in your own voice. It’s going to take time and a certain amount of confidence to develop. The more you write, the less time you will spend gazing at examples. You will still use them to tell what the editor wants but not the how. You’ll use your own words, sentences and phrases. When you do, you’ll create something that’s uniquely your own.