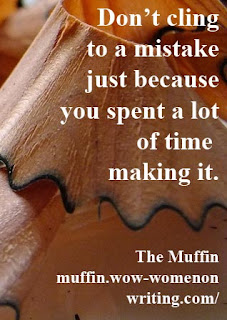 I had suspected the manuscript had a problem when I decided to run it past the editor on a weekend retreat. No, I wouldn’t have minded if she had said “This is brilliant and I want to buy it,” but that wasn’t the message I received. What she told me loud and clear was that I had a hot mess on my hands. Oh, joy.

We had received her comments in an e-mail before the event. I could have taken the time to create a defense – this is why my manuscript is fine just the way it is. Instead, I reached into my folder and pulled out three chapters. “You’re right. I like this version a lot better.”

You should have seen the poor woman’s relief. Instead of each of us defending our opinions, we had a productive conversation about how to come up with a stronger title, what definitely needed to go into the manuscript, and how best to format it.

I’d spent a year on the picture book version of this manuscript but when it didn’t work I kicked it to the curb. I want to love it, but more than that I want an editor and young readers to love it too. It doesn’t really matter why I chose to do X and Y. If it doesn’t work, I need to come up with a new way to tell the story.

Not that that is an easy decision to make. “But I’ve spent so long on this version! I have to make it work.” I say this even when, with each rewrite, it gets clunkier and increasingly awkward.

What I need to do, and I eventually do, is walk away from the project for a while. Weeding the garden, I think about what inspired me to tell this particular story. I think about the audience. I contemplate what’s working in the present form. Only when I have these things in mind do I sit down again to write.

But I don’t open the old clunky file. I open a new document and start from scratch.

“What? How can you do that when you’ve spent so much time on the other version?”

Truthfully, if it isn’t working, it doesn’t matter how long I’ve spent on it. It is time to start fresh with a clear vision in mind. Every time I’ve done this, I’ve been happy with the results. That said, I generally wish that I’d gotten to this point much sooner instead of continuing to struggle with whatever hot mess I've created.